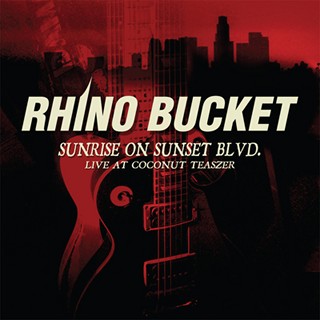 Review:
There aren’t that many hard rock and heavy metal bands with six studio albums under their belt that have never made it onto my radar in the last twenty five years, but Rhino Bucket — surprisingly — is one of them. Sure, I knew that they had been around for quite some time and had heard that they played a similar brand of hard rock as the three chord pioneers AC/DC. I might even have heard some Rhino Bucket songs before, but I could not for the life of me name one of them.

This was all about to change when I elected to purchase Rhino Bucket‘s latest release Sunrise On Sunset Blvd. I can’t recall the last time I purchased a CD without ever hearing (or remembered hearing) a song from a band, but I felt like this was worth the risk. First of all, Rhino Bucket scored the number three album of the year in Sleaze Roxx’ Top Ten of 2006 with their studio release And The It Got Ugly, and seeing as I have discovered many bands in the past after scouring that top 10 list (including Airbourne, Big Cock, Sister Sin, Steel Panther and Wolfchild), and after sampling a few songs, I felt this was a safe purchase. Second of all, Sunrise On Sunset Blvd. is actually a live recording from the Coconut Teaszer (one of many clubs on the Sunset Strip back in the early ’90s), from July 24, 1990 to be exact — which was likely at the tail end of the golden era of metal music. Finally, I knew that Rhino Bucket played a similar type of rock to AC/DC, so it is hard to go wrong there.

Sunrise On Sunset Blvd. captures a hot up and coming band — at the time — playing good old fashioned hard rock dripping with tons of sleaze and attitude. Rhino Bucket‘s sound comes across as mixture between AC/DC and Dirty Looks — a little faster paced and raunchier than AC/DC and a little slower and simpler than Dirty Looks — and frontman Georg Dolivo sounds a lot like the late Bon Scott. I like all the songs on this live release, with my favorites being “Inside/Outside” (with its catchy chorus) and the aptly named and quicker paced “Ride The Rhino”, although I don’t think that there is one song that really rises above the rest. So what you have is a steady stream of live no-frills sleazy hard rock with no “hit” single of any kind — which is exactly what I was expecting to hear from Rhino Bucket! I have to imagine that this would have been one kick ass show to witness.

This is one CD that you can play on any given day and you will likely enjoy it every time. I look forward to discovering Rhino Bucket‘s back catalog, although apparently some of their earlier releases are hard to find and/or more expensive than they should be. The good news in that regard is that eight of the ten tracks on Rhino Bucket‘s self-titled debut album can be found on Sunrise On Sunset Blvd.