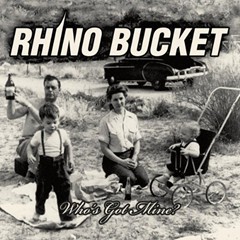 Review:
Who’s Got Mine? is studio album number six from the boys in Rhino Bucket. If you’re already a fan you’ll know exactly what to expect — and if you’re not, shame on you, because this is in-your-face three-chord driven AC/DC inspired rock n’ roll. Or it was…

The disc gets off to a good start with the head-nodder “Message In A Bottle”, then “Lifeline” follows and sounds really great until the rawhide, yeehaw solo. The relaxing “Back To Nowhere” slows down the pace, and while it’s not a bad number it’s just off the pace of what this band has set before. The excellent “Drive Thru Liquor” follows and picks up the energy/pace and has an absolutely catchy little riff playing throughout contrasted beautifully by some low driving power chords.

Now we’re off and running and the title track continues us onwards — it is a nice number, though not great, and again has a slower change of pace. Next up is a fast number, “Her Way”, which begins to get me excited again as the solo explodes out of nowhere and is enough to lift the song above average. “Joke’s On You” is a steady and solid number and then we have another fast paced track “Chase The Case” — with a good riff and lots of energy, this smacks of ‘Rhino Bucketness’! Then we run into “Hollywood And Wine” which improves as it goes on, which is fortunate as it starts off really poorly. “Something For Nothing” is another catchy tune before the disc closes with “Rare Beauty” — a decent enough track, but it doesn’t hit the home run you want when closing an album.

The problem with Who’s Got Mine? is that it’s just too nice. When it came to writing songs maybe Rhino Bucket were too ecstatic when their fans helped fund this album through a successful ‘Kickstarter’ album project. Also, whoever decided to ‘clean’ up the sound needs shot, because if this CD sounded rawer it would be right up there with The Hardest Town — but it isn’t by a distance. Who’s Got Mine? is a decent album… however when your ‘decent’ is better than most of the other stuff floating around these days you know it’s worth a shot.