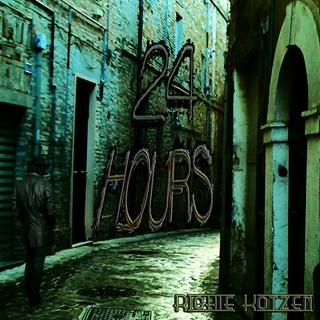 Review:
24 Hours marks Richie Kotzen‘s 23rd album since 1989 — including a live album, one under the banner of Wilson Hawk, one with Forty Deuce and two collaborations with Greg Howe. Throw in all the albums he did with Mr. Big, Poison, and Vertu, as well as ‘Best Of’ compilations, all the guest appearances and the tribute albums he has appeared on and the number exceeds 125… easily! Beyond sheer numbers, Kotzen‘s catalog of recorded material runs the gamut from hard rock, pop, blues, soul, funk, R&B and even country! With Richie it is hard to predict what is coming next as his influences are so diverse. One year you may get a hard rock flavored album and then the following year he throws you a curveball with a soulful R&B flavored gem. There is no cookie-cutter approach to Kotzen and his music — that is what keeps me coming back for more, year after year and album after album.

Richie Kotzen released the title track “24 Hours” as a single and video back in September, and my first impression was mixed due to the usage of auto-tune over his vocals in parts of the song. Over time I got past that and now dig the tune for what it is, a furious romp and one helluva pyrotechnics show on the fret-board. In the past few years Kotzen has ceased using a plectrum and went the Jeff Beck finger-picking route — how his fingers aren’t shredded after playing this tune is beyond me! “Help Me” kicks off with a funky lil’ guitar run before the vocals come in and just reeks of a tasty groove as the bass and drums are right in the pocket. Richie‘s vocals are in a higher register than usual on most of this track, as well as on most of the album, and my only gripe with the song is the buzzing bass synth part that comes in on the choruses and returns periodically throughout. It took me a while to realize that my stereo wasn’t screwing up, or that there wasn’t a glitch in the mastering, but that buzzing was intentional — don’t let it deter you though, the track is a sweet and funky lil’ ditty.

“Love Is Blind” is probably my favorite on 24 Hours, and if I was an A&R man I would advise Kotzen to release this song to radio and definitely make a video for it. I absolutely love the slide guitar playing on this track and Richie sings his ass off on the melodic gem that should resonate with the casual listener — I feel like going all ‘Wayne’s World’ in his presence and proclaiming “I’m not worthy!” This song also features his daughter August, Bret Domrose, and Alice In Chains‘ Jerry Cantrell as additional vocalists. Kotzen has worked with Domrose in the past, having appeared with Keanu Reeves‘ Dogstar as a second guitarist on several talk shows at the start of the decade, while August has really blossomed into a seasoned singer… it probably doesn’t hurt that both her parents are exceptional vocalists in their own right. She has even begun singing back-up at her dad’s live shows and takes the lead on versions of the Dorothy Moore classic “I Don’t Want To Be With Nobody But You” and The Yardbirds‘ “Shapes Of Things”. Cantrell really shines through with his ‘lead vocal ad-lib’ during the final chorus making the song an instant classic in my opinion.

“Bad Situation” is eerily reminiscent of the vibe on Kotzen‘s 1999 album Bi-Polar Blues, and that’s not a bad thing as I’ve wished for another blues oriented album over the past 11 years. Vocally he uses his range from one end of its ability to the other, and with some choice B.B. King inspired licks and phrasing in his guitar playing, I dig this one big time. I really connect with the lyrical content — it feels like he wrote this song about a prior relationship I was in. When a song touches you in a way that you feel that the musician wrote it about a time in your life, or you wished you wrote it because it was exactly how you felt about something, that is the mark of a true artist. Richie Kotzen has done that many times since I began following his career 21 years ago, and that is why he is my all-time favorite singer/songwriter/musician.

Now we have come to the end of an emotional journey, and to my other favorite song on 24 Hours, “Twist Of Fate”. Starting off with some classical acoustic guitar before coming in with his soulful vocal stylings, Kotzen‘s lyrics tell a story that takes the listener on a journey as he sings to the one he loves. You get a sense that the person Richie is singing to has given off the vibe of being unsure as to their relationship and that he is trying to convince her to put her guard down. The guitar has a “Maggie May” feel to it before the piano comes in — I can close my eyes and see Floyd Cramer playing the ivories on this track, but he has long passed. Another example of what a world class musician Richie Kotzen is, the song picks up steam with bluesy guitar runs over a subtle groove and the piano. While I feel this song is perfect as it is, I can envision Richie writing parts from a female perspective and having someone sing almost a point-counterpoint duet with him.

It took a few listens to 24 Hours as a whole to get it… but I GOT IT! There are no full-on rockers with the exception of the title track, or instant pop radio hits to grab you — instead you have to sit back and immerse yourself in the passion and soul that is flowing into your ears. 24 Hours feels like a cross between 1996’s Wave Of Emotion and 2001’s Slow and is a look inside Richie Kotzen‘s heart and life since his last release. While at points melancholy, you come away with a renewed sense of hope and love thanks to the audio journey you have just taken. In a few years 24 Hours will be looked upon by his legions of fans the same way 1998’s What Is… and 2006’s Into The Black are today — as a beautiful artistic look into Kotzen‘s soul while showing another step in his musical evolution. Well done Richie… well done.