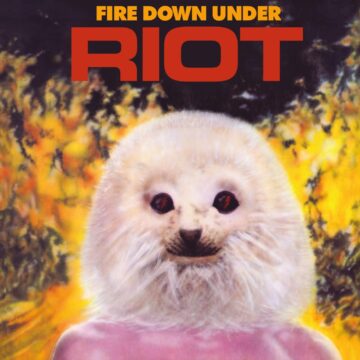 RIOT
FIRE DOWN UNDER
Released on February 9, 1981 (Elektra/Victor)

Review:
Was it really 40 years ago? Already? I remember, like it was yesterday – staying up late on Friday nights to listen to the Midnight Metal Hour on Toronto’s Q107, which was an excellent program. I was instantly hooked when the host played tracks from a New York band named Riot. The songs “No Lies” and “Swords And Tequila” absolutely blew me away with their awesome mix of melody and power. The album Fire Down Under has gone down in history as a legendary release which has influenced countless other metal bands which came after.

Fire Down Under, Riot’s third album, was the result of a considerable amount of struggle between the band and its record company. Riot already had a cult following in the US, Japan, and the UK, where they had supported their previous record on a tour opening for Sammy Hagar. They had also appeared at the first Monsters of Rock festival in Leicestershire, England, in front of 50,000 fans on a bill which featured Rainbow, Judas Priest and Scorpions. Fire Down Under was produced in the band’s hometown by their managers. The band had also experienced a recent line-up change to its rhythm section, bringing in bassist Kip Leming and drummer Sandy Slavin to join founding guitarist Mark Reale, fellow guitarist Rick Ventura, and vocalist Guy Speranza. This was to be the only record on which this classic line-up appeared.

Of course, the first thing you notice is the cover – the band’s seal mascot’s head on a human body. Many people have critiqued this odd choice for a metal symbol, but I’ve always thought that there was a bizarre charm in it, definitely setting Riot apart. Drop the needle, and the brilliance will roll over you like an ocean wave. Opener “Swords And Tequila” is a song for the ages: a dynamite riff, and Speranza’s soaring vocals set you up for ten songs of metal magic. Lars Ulrich and Steve Harris have cited this song as a favourite. Follow up track, the title song “Fire Down Under”, notches up the speed and features another awesome chorus. By now, it is obvious that we are into something very, very special – wonderfully crafted songs accented by sparkling production. A couple of my personal favourites are the contributions from Rick Ventura – “Feel The Same” and “No Lies” — which are a bit less frantic but incredibly melodic. The anthemic “Don’t Hold Back” and “Altar of the King”, featuring a tasteful guitar intro from Reale, are also highlights. The album’s closing track is an interesting one… “Flashbacks”, not really a song per say, but a collection of concert highlights organized into a very cool pastiche. There is not a dud in the pack, a jaw dropping collection of songs.

Riot were embraced by the fledgling New Wave of British Heavy Metal movement, and toured the country in support of Fire Down Under opening for Saxon. Unfortunately, during the band’s US tour opening for Rush, Speranza announced that he would be departing the group. The band continued, replacing him with Rhett Forrester, with whom they recorded two more albums. Sadly, tragedy followed the band. Speranza, who became a pest exterminator, died from cancer in 2003. Band founding member Mark Reale, who had struggled with ill health for some time, died in 2012. Forrester also died in 1994. I don’t know of too many other bands who suffered so much, and were denied a far better fate, than this plucky group of New Yorkers.

Fire Down Under has been re-released several times, featuring various bonus songs. If you are a fan of expertly crafted melodic Metal (aren’t we all?), it deserves a place in your collection. R.I.P. Guy, Mark and Rhett. I raise a glass to your collective memory.