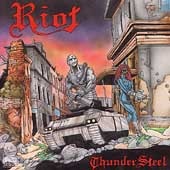 Review:
Thundersteel is a lost classic from the influential, yet often overlooked Riot. This version of Riot, with guitarist Mark Reale being the only original member left, reminds me of a cross between Judas Priest and Queensryche. Songs like “Thundersteel”, “Flight Of The Warrior” and “Run For Your Life” really rock!

The vocals and musicianship are very tight on this album. Riot should have gotten more recognition, but never seemed to be able to break into the American market. I give Thundersteel two thumbs up!