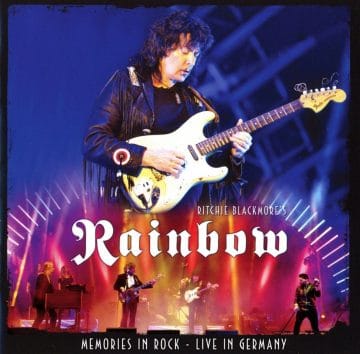 RITCHIE BLACKMORE’S RAINBOW
MEMORIES IN ROCK: LIVE IN GERMANY
To be released on November 18, 2016 (Univ)

Review:
When word spread that Ritchie Blackmore‘s Rainbow was going to perform a series of shows in Europe, the rock ‘n’ roll world went ‘bananas.’ Blackmore had turned his back on the world of rock ‘n’ roll several years ago to focus on his love for renaissance music. Over the years, Blackmore has released several records with his renaissance band, Blackmore’s Night. However, the audiences paled in comparison to that generated by Deep Purple and/or Rainbow.

Ritchie Blackmore‘s Rainbow circa 2016 doesn’t feature any of the familiar names that have graced the history of the band. Blackmore raised many eyebrows when he revealed the cast of characters that would perform the string of European dates. Rainbow‘s 2016 line-up features singer Ronnie Romero (who was born in Chile but resides in Spain), bassist Bob Nouveau, drummer David Keith and keyboardist Jens Johanssen (Yngwie Malmsteen, Dio). There’s a vast back catalog of songs to choose from since there are numerous Rainbow records. Blackmore could in fact have just elected to perform Ritchie Blackmore’s Rainbow and/or the Rising album and fans would have most likely been okay with that.

Instead, what we got on the newly released Memories In Rock: Live In Germany Blu Ray and double CD set is Rainbow with some Deep Purple. Frankly, I could have lived without “Smoke On The Water” and “Child In Time/Woman from Tokyo.” The screeching on this latter song has me hitting the off button no matter who is singing it. “Highway Star” has been done to death as well; killer track but enough already. I did enjoy the inclusion of Deep Purple classics “Perfect Strangers,” “Black Night” and “Mistreated” which are spectacular. Featured prominently are Rainbow staples “Since You Been Gone,” “Man On The Silver Mountain,” “Catch The Rainbow,” “Stargazer,” and “Long Live Rock ‘N’ Roll.”

Memories In Rock: Live In Germany doesn’t exactly capture Blackmore at his creative peak. In fact, Blackmore has lost a step, perhaps two. Never known to be one to show much emotion if any on stage, it’s hard to assess if Blackmore was tickled by new Rainbow or if he was reconsidering the thing altogether. Ronnie Romero is by no means Ronnie James Dio. That begin said, he doesn’t try to be which makes you respect the guy that much more. He’s clearly influenced by Dio though he’s not trying to mimic him. Romero’s presumably Spanish accent adds a little flavor to his delivery of the songs. Memories In Rock: Live In Germany doesn’t knock it out of the park. There’s rust there but it’s still a good trip down memory lane or a good ‘Ritchie Blackmore, this is your musical life’ kind of moment, if you will.