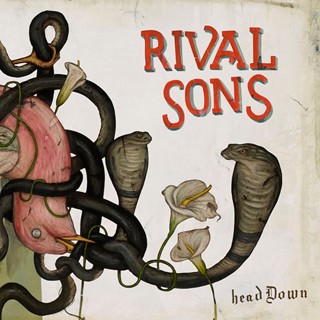 Review:
An essential ingredient in a rock ‘n’ roll band is a sense of mystique. Take a singer of Native American stock who, word has it, was raised by bears, scorpions and mountain lions… Our protagonist is hunted along the highways of North America by a six stringed brooding Krishna devotee who wears cool shades and believes that their destiny lies with a bombastic rhythm section and albums full of tribalistic chants that cry of aggression, struggle, ceremony and natural law.

Rival Sons‘ 2009 debut Before The Fire was followed by the more prolific Pressure & Time, and here we have the third chapter of this phenomenal adventure in Head Down, a record that turns the page and takes us deeper and further on our heroes’ journey of sonic discovery. Or, as guitarist Scott Holiday puts it, “bringing the world some much needed dirty rock ‘n’ roll”.

“Keep On Swinging” sets us off down the highway in style and is very much a brother to “Pressure And Time” from album of the same name. Holiday‘s nod to Jimmy Page, vocalist Jay Buchanan‘s irresistible ‘money’s gonna find my hand one day/and when it does I ain’t looking back’ is served up over an unalloyed rhythm section with breathtaking urgency. We’re in first gear, but then “Wild Animal” changes the game entirely with Buchanan‘s voice virtually unrecognizable over a Motown beat which might well bring them the kind of surprise radio hit they so deserve. “Until The Sun Comes” has a laid back Dandy Warhols feel whilst the vulnerable “Jordan” effortlessly conjures up the ghosts of Paul Rodgers and Paul Kossoff of Free.

The spoken vocal and spontaneous feel of “All The Way” will ensure a light hearted live classic whilst “The Heist” takes the album in yet another unlikely direction where the band hark back to the ’60s and the melancholic tone of Roy Orbison or Johnny Cash as a frustrated Buchanan is forced into armed robbery to feed his starving family. All of this prefaces the breathtaking epic that is “Manifest Destiny”, a two part tale of Native American strife at the hands of their white oppressors — ‘you know we’re dealing with Godless men’. Holiday‘s guitar smokes with the agony of vengeance before Part 2 sees retribution in a cacophony of wailing harmonica, screaming souls and the matter of fact repetitive chant of, ‘we’re taking lives at dawn’. The steel arpeggio and falsetto vocal of the album’s coda “True” brings a final optimistic tale of spiritual peace found in the simple beauty of family life — ‘when I come in from the fields you wash my body and sit next to me/we will have two children they will call you mama’.

Just like its composers, Head Down is an incredibly rich melting pot of unlikely influences that both entertain and challenge. It deserves far more than a convenient ’70s retro rock’ tag — it deserves reverence.