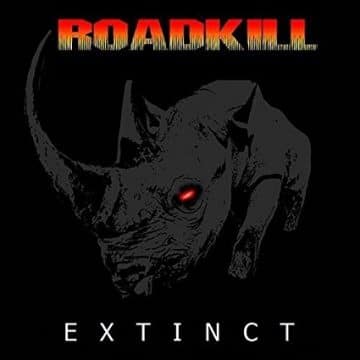 Review:
Sometimes, less ends up being a whole lot more. That’s the case with Australian heavy metal rockers Roadkill who adopted a simplistic approach to their music on their latest studio album E X T I N C T with great results. Roadkill excel at bringing back that old school feel where listeners would have the time to sit, enjoy and sip on a nice brandy or whiskey while listening to a simple guitar riff during a song without being bombarded by a flurry of other instruments that would overshadow that very guitar riff.

In a way, many of the songs on Roadkill‘s E X T I N C T remind me of Saxon‘s classic song “Denim And Leather.” That song to me was the epitome of letting a guitar riff breathe throughout an entire track and making a song brilliant while keeping it simple. You’ll recall that at one point during “Denim And Leather,” Saxon‘s frontman Biff Byford gives each member a chance to shine — the drums, bass, vocals, etc. — and you can literally hang on every note of that guitar solo, which is almost played in slow motion yet sounds so bombastic and powerful. The songs on Roadkill‘s E X T I N C T do not really sound like Saxon‘s classic “Denim And Leather” but the Australian heavy metal rockers make sure that you will appreciate every one of their guitar riffs by giving them plenty of time to breathe and sift into your psyche. The end result is some heavy yet at times slow powerful guitar riffs that may remind you of classic Black Sabbath era guitar riffs. Tracks such as the album opener “Ready For War” and the powerful “Evil” are built on these heavy guitar riffs and never stray from them throughout. While singer Neil does not have a Ronnie James Dio type of powerful delivery, his voice ends up working quite well with the heavy riffs provided by guitarists Zig and Jim, and reminds me a bit of the late Bon Scott‘s singing as his unique vocal delivery provides a certain charm to Roadkill‘s songs.

If it wasn’t for one really unfortunate very weak track towards the end of the album, Roadkill‘s E X T I N C T just might have been a real contender for one of the metal releases of the year. The first four songs on E X T I N C T are pure heavy metal bliss and I love every second of those songs. “Down And Out” isn’t bad with a nice bluesy feel to it at times. “Hellbound” is one of the faster tracks on E X T I N C T and really rocks once it gets going. Where the wheels fall off the bus for Roadkill is during the attempt at a moody rocker in “Wishful Thinking.” It’s like a mattress losing all its air. Pffffff… You can just feel all the air coming out as the slow boring verses on “Wishful Thinking” kill the momentum of the album. Even the pretty good chorus can’t save the track from its dreadful verse portions.

Just about anything would be better than “Wishful Thinking” and so “Death Comes Calling” which is an alright song at best is very welcomed. “In The Dark” is another classic Roadkill track where they give you lots of time to savour and enjoy the guitar riff upon which the song is built upon. Roadkill close off E X T I N C T with their heaviest track on the album. The song’s introduction is quite deceptive with the harmonica intro making you think you’re about to hear a Billy Joel classic before Roadkill hit the pedal to the metal. “Head On” reminds me for some reason of Accept and has all the features of a heavy metal cruncher.

I was at first quite surprised to see Melodic Rock Records being the label behind Roadkill‘s heavy metal opus of E X T I N C T but upon listening to it, I have come to the realization that Melodic Rock Records principal Andrew McNeice must have come to the same realization as me. Roadkill have simply come up with some brilliant old school classic heavy metal and anyone hearing the band’s new album E X T I N C T should be able to appreciate that.

Roadkill‘s “What The Hell” video:

Closing song off the “E X T I N C T” CD which is produced by (Psycroptic) guitarist Joe Haley. The song, Head On’ – was inspired by the head on car accident …