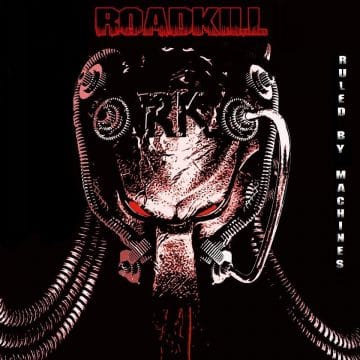 Review:
Roadkill are back with a new studio album titled Ruled By Machines to follow up their very good old school masterpiece E X T I N C T. After Roadkill‘s more Guns N’ Roses / Mötley Crüe inspired 2012 album Profanity & Innuendo, the Australia based rockers seem to have finally found their sound on 2016’s E X T I N C T and do not stray away that much with their latest release. The songs on Ruled By Machines still has the band mastering the art of giving guitar riffs lots of time to breathe (check out “Looking For Love” for example) but for the most parts, the tracks are rather upbeat paced rockers and feel faster paced than the ones on the previous album.

I hadn’t noticed this on prior Roadkill albums but lead vocalist Neil Wilson‘s voice reminds me at times of the voice from Scorpions singer Klaus Meine. On Roadkill‘s aptly named song “Love At First Bite”, Wilson really sounds like Meine. In fact, if someone told me that “Love At First Bite” was Scorpions song, I wouldn’t think anything of it and would be quite pleased that the Scorpions have finally gone back to some more rocking and harder edged songs. It’s hard to label Wilson a Meine copycat considering that Wilson has been at it for over 35 years with his other band Tyrant and it’s really the first time that I find that he sounds like Meine. What I really like about Wilson‘s performance on Roadkill‘s Ruled By Machines — and this is something that many newer bands can learn from — is that Wilson is by no means what I would consider to be a “great” lead vocalist in terms of vocal range and screams but every song on Rules By Machines seems to fit very well within his vocal abilities. There’s nothing more painful than hearing a singer attempt to sing something that he or she is incapable of doing and that’s simply not the case with Wilson on Ruled By Machines. The one knock I do have is that Wilson‘s vocals seem at times to be drowned out a little bit by the music.

Unlike E X T I N C T, there are no weak tracks on Ruled By Machines. It’s just one great rocker after another. I do find that the last four tracks aren’t quite as strong as the first seven but they are still worthy of listening to. Probably the best part on Ruled By Machines is the guitar playing by Zig and Jim. From simple killer guitar riffs to some rather cool solos and harmonies (check out the guitar solo on the title track), these guys are killing it on Ruled By Machines. My favorite tracks on Ruled by Machines are “Last Stop Before Hell” (which just got the video treatment), the faster paced “Breaking All The Rules” and the upbeat “Looking For Love.” One thing that bugs me a little bit is the almost cheesy start to the album opener and title track with the machine like voice stating “Ruled By Machines. Ruled By Machines.” Whatever the case, once the guitars kick in, there is no doubt that you know that you’re in for a real treat.

I haven’t heard all of Roadkill‘s earlier albums but out of their last three studio albums and even though I thought that E X T I N C T was a terrific album, I think that Ruled By Machines is even better. I will say that the album cover for Ruled by Machines is a bit underwhelming (what the fuck is on the album cover anyway?) with the Roadkill band name rather hard to decipher compared to the band’s prior album covers so I hope that no one overlooks this very good record simply by getting turned off by the album cover.

Second video/single off the “Ruled By Machines” CD which is produced by Psycroptic guitarist JOE HALEY.We’ve all dropped into that ‘Last Stop’ – sometime in …