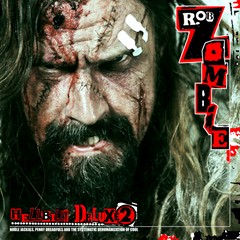 Review:
He took us to the depths of hell and introduced us to all things spooky with Hellbilly Deluxe in 1998 and more than a decade later Rob Zombie is back with his band of monsters in Hellbilly Deluxe 2: Noble Jackals, Penny Dreadfuls And The Systematic Dehumanization Of Cool.

From traditional guitar heavy tracks like “Virgin Witch”, to the upbeat tempo and playful stand out cuts like “What?”, Rob Zombie makes his mark as the master of music that takes your fear of ghouls and goblins and turns it into something you can head-bang to.

The album loses its steam halfway through however, with forgettable songs and a lackluster performances from Zombie and guitarist John 5. The album’s finale song “The Man Who Laughs” falls short and leaves you craving for the satisfaction the beginning of the album built up.

Hellbilly Deluxe 2 plays like a mixed compilation CD of Rob Zombie songs with no flow, but offers up a few memorable tracks that listeners will be playing over and over.