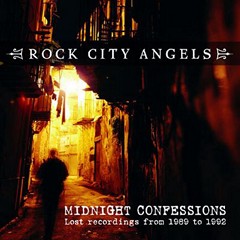 Review:
When it comes to the Rock City Angels there have always been more conspiracy theories surrounding the band than actual songs released. Midnight Confessions: Lost Recordings From 1989 To 1992 attempts to alleviate that problem by collecting several songs written for what was to be the group’s second Geffen album — which never materialized.

These previously unreleased recordings feature three different version of the Rock City Angels, displaying a revolving door policy with only singer Bobby Durango and drummer Ringo Jukes appearing throughout. The Young Man’s Blues line-up makes an appearance on 5 tracks, including the album’s highlight “Looks Like Up”. This song perfectly captures the hopelessness the band was likely feeling after watching all their hype come crashing down to Earth — the chorus of “I’ve been down so long, it looks like up to me” perfectly conveys that message. “Shattered Shake” on the other hand finds the guys simply rocking out before drifting into a great cover of The Grass Roots‘ “Midnight Confessions”.

The second version of the Rock City Angels appearing on this CD slow things down with “One Last Time”, “2:45” and the haunting “Cryin’ To The Night”, but also prove they can rock on the excellent “Right On Time”. Finally we have the Rock City Angels‘ last breath, as they tried unsuccessfully to reignite the band’s fortunes with Thin Lizzy and Motorhead‘s Brian Robertson. The result was “Heart And Soul”, a soulful rocker that is alright but pales in comparison to the band’s best works.

Despite the accusations and hard feelings that have been passed back and forth between some members of the band over the years, the one thing they can’t take away from each other is that they made some magical music together. You can listen to Midnight Confessions and try to piece together the strange story of the Rock City Angels or you can simply enjoy the music without overanalyzing these underground legends.