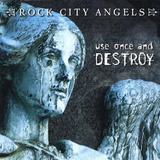 USE ONCE AND DESTROY
Released 2008 (Rock City Angels)

Review:
Forget the hyped Anvil documentary! If anyone wanted to explore how completely insane the music industry can be Hollywood would look no further than the Rock City Angels. Few bands in history have been surrounded by so much hype, controversy and conspiracy theories that eventually the truth gets lost somewhere in the middle.

Use Once And Destroy doesn’t do much to set the story of the Rock City Angels straight, as even band members have a differing opinion of whether this is a true RCA album or not. For now though I will dismiss the behind-the-music stories and concentrate on the music itself. I for one didn’t even know this CD existed until a reader of the website asked if I had it. I didn’t at the time, but quickly made a purchase. Since that time many people have asked me how Use Once And Destroy compares to the band’s previous work, and after several listens I’m still not sure!

This is definitely a strange release, one that takes several spins to appreciate. The band, consisting of original members Bobby Durango and Andy Panik, sounds great and the years of hard living haven’t affected Durango‘s voice in the least. As for the music itself, it really isn’t their early punk sound, or their glam days or even the southern rock they concocted while holed up in Memphis, but a mish-mash of their entire sordid career. At times the disc is upbeat and other times it appears to be boiling over with pure hatred. “Corrine” and “I Got Your Heart” could have found themselves on Young Man’s Blues and are great additions to the Rock City Angels legacy. My personal favorites though are the pop-rock “I Keep Fighting”, which is so up-beat that you can’t help but get into lodged into your cranium, and the dark “I Ain’t No Miracle Worker” which contains one of Panik‘s best bass lines.

If you like the punk version of the band “Convicted” will be your thing, as it is one of the earliest songs ever written by Durango and Panik. While I’m not a punk fan, the song shows how far the band has evolved over the years. The spoken word intro to “Use Once And Destroy” is just weird while the one for “Divine Asylum” is an infomercial on the joys of drugs – acid in particular – and judging by the band’s past is an odd inclusion. Is there still a part inside each member that, even though they are now clean, still enjoys the idea of completely losing control and being on the brink of breakdown? As with everything else the Rock City Angels do, this song creates far more questions than answers.

From a $6 million plus contract with Geffen to the bare-bones approach and artwork of Use Once And Destroy, this CD/band displays how mean the music industry can be. It seems almost appropriate that the inaccessible nature of Use Once And Destroy become part of the insane history of the Rock City Angels because the opinions on this CD will be as varied as the stories behind the band. Fans of the band’s glam roots will likely be disappointed while Young Man’s Blues aficionados will find more to like. Some people will love this CD, some will hate it and the rest will wonder what the hell is going on!