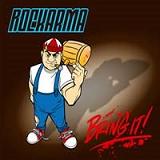 Review:
It’s amazing how much a good production and mix can help a band. Firehouse‘s Bill Leverty did an alright job with RocKarma‘s self-titled debut, but Bombay Black members Ty Sims and Erik Johnson completely outshine him. The duo have perfectly captured RocKarma‘s driving guitars and massive melodies, making Bring It! a hair-metal fan’s wet dream.

Only vocalist/guitarist Damon Kelly remains from the band’s humble Canadian beginnings and he has found a band that shares his melodic rock vision. I can sum up RocKarma‘s sound in one word (times two), and that is Danger Danger. The two bands share a sound that is layered in harmonies and represent pure 80s party rock.

“Between You N Me”, “All 4 You”, “Get Me Outta This Hole”, “I Know” and “Bring It!” could easily be stadium rock anthems. The songs are almost larger than life and the sound is crisp, clear and to the point. My only complaint here is that the second half of the disc doesn’t rock as hard as the first, but that just makes those aforementioned songs sound that much better. Bring It! does end on a killer note however with “Same Ol Song”, which is a heavy rocker that finds the band expanding their sound and features some killer axe work. Speaking of the guitars, am I the only one who noticed that the riff to “Lets Go” is identical to Jetboy‘s “Feel The Shake”?

This CD lives up to its name, as RocKarma does in fact ‘bring it’. What they bring is great melodic rock ‘n’ roll, a sound that has almost been rendered commercially extinct by groups that couldn’t hold a candle to the musicianship of these guys. RocKarma ‘brings it’ and I suggest you ‘get it’.