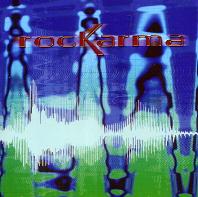 Review:
The vast barren plains of Saskatchewan, Canada may be as far removed from any rock scene as you can get, yet being driven indoors by the long dreary winters and the mosquito infested summers gives one plenty of time to get creative. It was in this environment that Damon Kelly created RocKarma, a band that can be described with one word – slick.

The production was handled by Firehouse‘s Bill Leverty, who gave this release a very crisp and clean sound without sucking the life out of the songs. I really like Damon‘s guitar tone here, it reminds me of Crush 40, a band that impressed me a couple years ago. His vocals are a bit too syrupy for my tastes, but they suit the music and give the album that 80s pop-metal feel.

The disc kicks off with the up-beat party song “Each Other” – a song that defines the guitar sound for the entire album. One of the better songs on the disc is “Feels Like I’m Falling”, a melodic number with a big chorus while “The Other Side” is a return to the pop-metal sound that bands like Danger Danger made famous. “Honestly” is the typical heartfelt ballad that will have the guys in the crowd with their lighters in the air and the women weeping uncontrollably. The final cut, “I’m Lost”, is the heaviest on this release and reminds me of Jake E. Lee‘s work with Ozzy Osbourne – a great way to end the disc.

If you like your rock on the sweet side, Damon Kelly‘s RocKarma will be perfect for you. The band will be heading out on the road soon and it will be interesting to see if they can remain this slick live. You can buy this CD at www.rockarma.com.