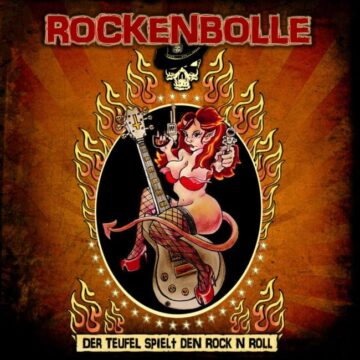 Review:
I must confess that my German linguistic skills are quite limited. In fact, they are so limited that the only two German words that come to my mind are “Oktoberfest” and “Danke.” Having never properly visited the country certainly does not help. I did walk across the border from Germany to France more than 26 years ago just as the city of Strasbourg seemed to be waking up to another weekday of work but that’s a story for another day. Suffice to say that although I’d love to go to Germany (or any other country than Canada at this point) but feel stopped in my tracks with the Covid pandemic still raging. At least, I got a little bit of German education through Rockenbolle‘s second album Der Teufel Spielt Den Rock N Roll.

Whenever CDs make their way to the Sleaze Roxx headquarters, there are a couple of things that I check out. First off is the album cover. I’m usually able to tell right off the bat from an album cover whether this is a group whose music will fit Sleaze Roxx‘s admittedly limited musical scope. Secondly, I scan through the press release that often accompanies CDs to see if I can easily identify the artist or band’s genre of music. That description alone tells me whether a CD might make its way to the Sleaze Roxx cemetery (a large box of never played CDs stored in my garage — I’m getting close to starting a new box). You might be surprised to know that an estimated 60 to 70% of CDs that arrive at the Sleaze Roxx headquarters don’t even fit the website’s musical scope. Luckily for German rockers Rockenbolle, I knew right from looking at their new album’s cover that Der Teufel Spielt Den Rock N Roll would be getting at least a few spins. After all, the album cover for Der Teufel Spielt Den Rock N Roll screams “Sleaze Roxx.”

One concern that I had upon scanning the track names on the CD was that half of the song titles were in the German language. As I started to listening to Der Teufel Spielt Den Rock N Roll and scan through the CD booklet, my concern was confirmed as Rockenbolle elected to have six songs sung in the English language and the six others in the German language. I had previously mentioned that I got a chance to get a little German language education via Rockenbolle‘s new album and that’s because I have been using Google to find out what a lot of the words mean. For starters, the album title Der Teufel Spielt Den Rock N Roll apparently means ‘The Devil Plays Rock N Roll.’ Sure, it’s not the most original album title but it works and frankly, it’s the kind of record title that I expect from a lot of bands that grace the Sleaze Roxx website.

I was very pleasantly surprised with the first track “Fear In My Balls” on Der Teufel Spielt Den Rock N Roll as whomever is singing that song or least the first half sounds an awful lot like W.A.S.P.‘s iconic frontman Blackie Lawless. I sat whomever is singing the song because it looks like Rockenbolle have two people sharing the singing duties — bassist Olli and guitarist Krille. From then on, Rockenbolle adopt a more fast paced Motörhead meets The Ramones type of sound. The guitar riffs and the rhythm section are often pretty basic but they work quite well together and there really isn’t one bad song ‘on the record.’ My favourites are “Rock Bitch”, “Peacemaker” and “Way of Life.” Surprise, surprise, all three songs have English lyrics. Some songs do suffer from being a little too simple and lacking sophistication such as the track “Nothing Is Real” where the same chorus line “Everything I Told You, Nothing Is Real” is repeated four times in a row. That might work if the chorus section was really compelling but it’s not and the song is one of the weaker ones.

As someone with very limited knowledge of the German language, it’s hard to really get into Rockenbolle’s tracks sung in German. I really wonder whether I would like those tracks better if they were sung in the English language. That leaves me to wonder why Rockenbolle would opt to have half of the songs on their latest album sung in the German language. English is a much more recognized language from an international perspective so Rockenbolle are kind of limiting their worldwide appeal with their decision to sing half the songs in the German language. Ultimately, that is what is stopping me from adding Rockenbolle‘s album Der Teufel Spielt Den Rock N Roll to my regular rotation of newer albums to listen to as although the album overall is fun to listen to, the German lyrics to half the songs stops me from really getting into half of the tracks.