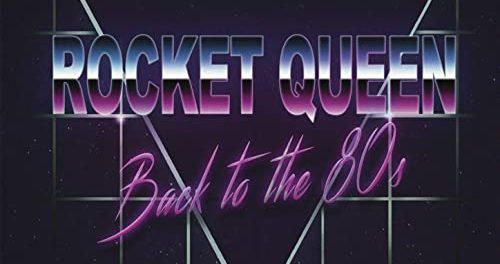 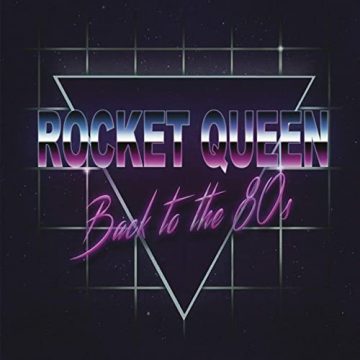 Review:
If ever there was a modern day band perfect for Sleaze Roxx, it just might be Rocket Queen, a collective of rockers based out of Zaragoza, Spain and based on their latest release Back To The 80’s, a band who have obviously cut their rock and roll teeth on bites of ’80s hair metal.

Despite a revolving door of members, Rocket Queen have managed to play an impressive number of gigs and release a couple of pretty cool EPs including 2015 four-track debut First Round since guitarist Gabi Bultaco formed the band in 2013 out of the rock and roll ashes of previous band Miss December. Bultaco‘s determination to live out his vision of hair metal for the 2000’s has persisted through enough line-up changes to spin even the sturdiest of heads even to the point that once the band is able to rock a stage again, it will be with a different line-up than the players on Back To The 80’s, which was only just released this past June. But in the words of what is surely one of their fave bands — “On with the show.”

There was a time many moons ago when releasing full albums were all the rage. It was a dream for every band if you will but over time, the landscape of music overall has changed so much making it more feasible to put whatever resources a band has at its disposal into packing a bigger punch on smaller offerings like EPs and even as little as the occasional single here and there. The same obviously rings true with Rocket Queen who for the second straight time kick out a four-song blast of old school sounding rock and roll proudly and unapologetically named after title track “Back To The 80’s.” If that doesn’t flat out scream wild, loud, and fun, I don’t know what does.

One shot of the cover art and title and you almost just wanna sigh to yourself, “Sheesh, another Steel Panther knockoff” but hold on now. As blatantly ’80s as this new one from Rocket Queen looks and sounds, it’s substantially something far more sincere than a bunch of guys with a great idea going out and buying a pile of spandex, wigs, and an actual rock singer to pen hard rock tunes making fun of the most Spinal Tap sides of hair metal. Will this find equal footing alongside all those old eyeliner and Aqua Net adorned ’80s albums in your collection? Maybe not but for all the bitching and complaining about no new recorded material from old school hair metal fans yielding very little hair metal return, Rocket Queen at least offer up a quick almost handful of new rock and roll and hey, that’s something Mötley, or Poison, or Guns, or…yeah…than most of ’em can say.

Starting with its title track, Back To The 80’s is a fun, energetic blast of rock and roll that guns it from the jump very much like Mötley‘s “Kickstart My Heart” and is loaded with the usual pounding drums, down the line bass, and guitar riffage required for Sunset Strip ’80s era glam rock. Out of all the pieces, maybe the only one that sticks out is singer Judy Blumen‘s partly accented vocals but she flexes more than enough plucky power to pull it off. Lita Ford or Janet Gardner, she’s not but she doesn’t have to be. This is rock and roll and it sounds oh, take me back familiar and yeah… I’m totally down with that.

Speaking of Gardner, on “Little Treasure”, Rocket Queen channel shades of Vixen as well as melodic rockers like FireHouse, Dokken, and even Keel complete with killer solo and pounding drum breakdown. It’s downright amazing how well put together these songs as from start to finish they are textbook ’80s hair metal. “Broken Heart” could easily have been a White Lion song had Mikey T. handled the vocals and it has that infectious simple chorus associated with the likes of pretty much every band mentioned above.

Seriously, I challenge any fan of those bands (and the thousands more back then that walked the same walk) to just not be sucked into wanting to bounce around, beat on the steering wheel and attempt to play air guitar while cruising around listening to this. The key change at the end of “Broken Heart” is heartbeat raising and intensely freakin’ awesome. This is some great stuff and even the broken English talked intro and verse vocals on closer “Feel The Night” aren’t enough to make me wanna change the channel. Back To The 80s rocks in a way that makes me miss the ’80s more than I always do! Whoah!

With every song between three and four minutes long, the only negative I have for Rocket Queen‘s Back To The 80’s is that just about the time you’re breaking a sweat and ready for more, the whole thing’s over. OK, so there’s nothing new here but that’s the point. These days, “new” rarely means great and Rocket Queen hasn’t just tossed out something that they tried to make sound ’80s hair metal, they have pulled it off hook, line, sinker, shred, scream, pound, and every other word you might wanna attach to your favorite decade of decadence hard rock and roll. And for years, I thought all the great sleaze stuff was coming from Sweden and Finland. Well dang man! It looks like the Spanish are comin’ to take us back to the ’80s!