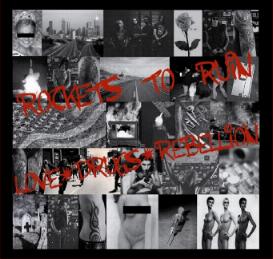 Review:
Finally! Here’s a review where I have something negative to say! However, it’s not about the music so I guess that kind of blows that theory out of the water. Really, I’m not that easy all the time, I’ve just been lucky to come across some good stuff!

First the negatives, what there are of them. I wish this CD would have been longer, it clocked in a just over 35 minutes. There’s no wasted time or any filler, so at least it’s a solid 35 minutes, but still, after a couple of listens that’s not enough. Secondly, this is a four-piece band with only one guitar. As good as they sound I drool while imagining how much fuller and richer this would sound with more strings, but that’s just a personal preference. Lastly, why can’t lightning be captured in a bottle? I saw Rockets To Ruin open for Paul Stanley and on stage they were incredible, the songs they covered on this CD just screamed and begged to be purchased after the show. I gave in and am glad I did, but this CD pales in comparison to their live show.

That out of the way, here come the goods. This four piece band hailing from Atlanta, Georgia, should serve notice that you don’t have to come from LA or NY to have great sound or that a band from the deep south will have dark southern roots showing in their platinum blonde rock. This band oozes 80s sleaze from the strip with early sounds of Faster Pussycat and L.A. Guns accompanying the poise and attitude from Zodiac Mindwarp‘s portfolio. And the whole time I’m watching them command the stage and listening to solid riffs and relentless drumming I keep hearing a sound that sticks out in my mind. What band is it? Who does this sound like? What sound keeps running through my head? Finally it comes to me – originality. For as much as you can make a
comparison to another group that has come before them you can feel the huge breath of fresh air pounding out of their amps. There may be the beat of a drummer at their parade, but these guys aren’t marching to it – they’re running!

The only concern I have with Rockets To Ruin is longevity. Skid Row‘s very own Rachel Bolan produced this disc and I can only hope he has the band’s best interest at heart and will help them along instead of pulling a Dana Strum. I’ve had this CD playing all day long today and can only sum it by saying, “Hell Yeah! I want more!”