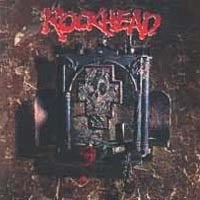 Review:
The only release by famed producer Bob Rock‘s Rockhead was a surprisingly entertaining album. The album kicks off with the incredible Bed Of Roses, which is different from Bon Jovi‘s version, but could have easily fit on one of their albums. Other standouts include “Chelsea Rose” (with it’s amazing chorus), “Lovehunter”, “Hard Rain” and the ballads “Angelfire” and “Death Do Us Part”.

Bob Rock has a tendency to over-produce albums, but while Rockhead is well polished, it doesn’t cross that fine line. Musically comparisons can be made to Bon Jovi (who co-wrote and made guest appearances on some numbers), Lynch Mob and other glossy melodic rock bands. As with most late 90’s bands however, the public all but ignored them. But Rockhead sounded great and is worthy of two thumbs up!