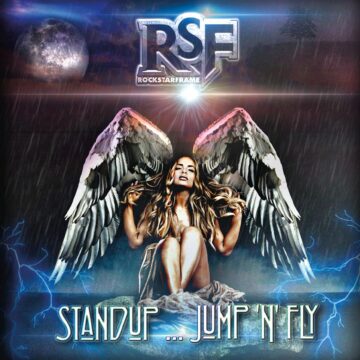 Review:
The history of rock and roll is filled with tales of artists bouncing back from adversity from the most obscure of artists to the most legendary often offering reference to the saying, “It’s not how you start, but how you finish.” Even the most groundbreaking artists aren’t safe from distractions and obstacles with the likes of Elvis Presley and Jimi Hendrix suffering punches to the performance gut early on. Presley was told to stick to his day job driving trucks before being booted out of the Grand Ole Opry in 1954 and Hendrix was dropped from a tour opening for The Monkees after nights of being booed by the prefab four’s young audience. But in rock and roll, detractors can serve as more motivation, especially compared to the ultimate road block, death.

While in a coma after falling off a cliff, drummer Max Klein was moved to start a band through rock music played by family while comatose in the hospital. In 2012, the band Rockstar Frame was born in Milan, Italy and within two years the group’s original line-up signed with London’s Musicarchy Media releasing their debut album Rock ‘N’ Roll Mafia in 2015. Two more years followed filled with accolades from publications like Revolver, Fireworks, and Black Velvet; tours across Europe (including a Russian trek with Sweden’s Backyard Babies), and the release of sophomore album Bulletproof. Klein had a solid case for rock and roll comeback story of the decade right? Well, not quite yet. Just as Rockstar Frame‘s second album started gaining traction, internal issues caused the band to splinter apart. But again, “It’s not how you start, but how you finish.”

When compared to coming back from the edge of death, starting a band over from scratch hardly seems that difficult and despite having created a following as a five-piece, female fronted, rock band, Klein took the opportunity to create what he feels is something stronger attracting stellar musicians also from outside of Italy. By the time 2019 slowed to an end, Rockstar Frame had already started to make a new noise with Argentinian vocalist Leonard F. Guillan, bassist Ronam Destefani from Brazil, and fellow Italian Ian Darrell joining Klein in a totally revamped line-up. That was enough noise to attract interest from Volcano Records leading to what will be Rockstar Frame‘s third studio record Stand Up…Jump ‘N’ Fly in 2021. A perfect title for a musician and band rising from the ashes not just once, but twice.

Compared to the often clunky keyboard tainted modern rock sounds of the band’s first two albums, Stand Up…Jump ‘N’ Fly finds Rockstar Frame version 2021 pouring out a mid-’80s hard rock boot down groove along the lines of Dr. Feelgood era Mötley Crüe. While seemingly awkward in spots, a full listen through makes it obvious that Klein and his new rock gang were going for something more than just the obvious. Along with Destefani, the once on the edge of death drummer fills in the bottom end fully giving guitarist Darrell tons of space to slide right on in and thicken in the spaces occasionally dipping out to rip a choice solo or two. Even with one less musician, this version of Rockstar Frame delivers a fuller, more solid sound and it works perfectly to their benefit creating a mix of melody and in your face hard rock strong enough to carry Guillan‘s powerful pipes. Lyrical construction may still be the band’s weak point but on Rockstar Frame‘s latest, the frontman makes it work and through the sheer intensity of most of the tunes, the power and energy nearly makes it tough to notice the simple vocal lines and accent.

Musically, Stand Up….Jump ‘N’ Fly seems to flex an unusual mix of influences that create an overall sound landing somewhere between ’80s hair metal and more recent European sleaze rock. On the older end, songs like “Is Not The End,” and “Like A Monster” invite comparisons to the bass-driven dark thump of Dr. Feelgood era Mötley Crüe while “Ready To Go,” and “One In A Million” veer into classic Scorpions territory ala Blackout. “Hypnotized Fools,” “Hey Man!” and “Break Me Down” take a page from the more melodic anthemic side of ’70s shock rock ala KISS and Alice Cooper as well as the glam of Hanoi Rocks.

Along the way, Rockstar Frame not only reveal possible old school influences but also sounds reminiscent of more modern European sleaze rock bands like on raw track “Get On My Knees,” and the catchy power pop metal of “Golden Dreams.” Overall, the odd tunes just might be the three of the four that close out the album. “Beyond The Fear” is a power ballad that somehow floats somewhere in the middle of Hanoi Rocks / Scorpions territory. “Halloween Night” is an oddly weak Lizzy Borden-like  tune. Closer “Sunshine In The Dark” is a weirdly floating acoustic / organ song that awkwardly sounds like Hanoi trying to cover the poppier side of a Poison campfire ditty. Honestly, while I can appreciate Rockstar Frame having the nads to end on such a mellow note, it would have benefited the record to rock to a finish with the way more impactful “Like A Monster.” Heck, even my second least favorite track “Halloween Night” would have been a far better song to end things on.

Despite a few weak points, overall, Stand Up….Jump ‘N’ Fly is a uniquely cool rock and roll record that kicks way more tush than the band’s first two releases. Will fans of those first two keyboard-loaded, female-fronted records also buy into this more rocking male-led version of Rockstar Frame? Only time will tell but in 2021, the Italy-based band is delivering a gritty, sleaze rock sound rolling around in a messy bed of ’80s hair metal and millennium age Euro-sleaze. It’s cool, it’s refreshing and OK. For some, the vocals might be a little tough to swallow but given a chance, the latest from Rockstar Frame is downright more than enough to make rock fans feel damn good about the future of rock and roll.

Rockstar Frame‘s “Get On My Knees” video:

Rockstar Frame‘s “Is Not The End” lyric video: