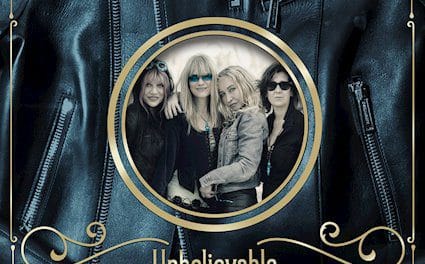 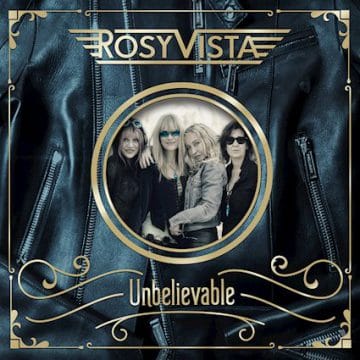 UNBELIEVABLE
To be released on February 8, 2019 (Steamhammer)

Review:
Rosy Vista started out in Hanover, Germany, way back in 1984. After releasing a couple of singles, and an EP, the all female quartet split up for nearly three decades. They got the band back together in 2018 to write and record Unbelievable. Five of the 11 original tracks on Unbelievable are drawn from Rosy Vista’s 1985 EP You Better Believe It. Those songs have been re-recorded along with six new tracks, plus a cover of Steppenwolf’s “Born to Be Wild.”

The opening song “Crazy” is a melodic rock treat, with intense guitars and a chorus that really reminds me of the chorus from the 1983 Helix release “Does a Fool Ever Learn.” “Sadistic Love” is juicy. Like many of the other songs on this album, vocalist Andrea Schwarz channels a Sass Jordan meets Tina Turner sound — husky but also a bit sexy. “Sadistic Love” is the first of the band’s re-recorded ’80s tracks, and sounds perfectly modern, particularly in the context of the Sass Jordan/ Brian Tichy effort S.U.N. from a few years ago.

“Master of Control” may be a new song, but it sure reflects an old school feel that may fall in with Whitesnake of that era. Mid-tempo, without sacrificing the power chords and solid vocals. There’s a thing about “Too Much Feeling” that triggers a memory, but I’m not quite sure. A slow and moody opening with almost jazz-like chording and a husky vocal. It picks up later on, and even with a few power chords, keeps with the jazz theme in the solo. “Tables Are Turned” is another reboot, and it’s pretty good with a solid guitar opening and a chorus very much from 1984.

I am told that “Hopatina” was written by guitarist Anca Graterol when she was very young, inspired by a Turkish traditional bellydance theme. The opening and bridges bring to mind Joe Satriani type riffs. There’s a gritty quality to “Poor Rosy” that makes it unique on this album. The chorus alone is worth checking out. Another re-recorded track “Rockin  Through The Night” has some great guitar work. I’m thinking a bit like Ozzy meets Def Leppard. Finally, when I saw the cover “Born To Be Wild” as the closer, I thought ‘really’?  Does the world need another version of this song?  Apparently, this was a staple of ’80s concerts by Rosy Vista, so there’s an emotional context to performing this cover. It isn’t particularly unique, but to their credit, they nail the harder edges of this song. They do the original proud.

Rosy Vista is a new name to me. The band released a few singles and an EP in the ’80s, broke up, and got together again for giggles in 2018. Unbelievable is a pretty solid throwback to melodic rock from that bygone era with a combination of 35 year old re-recordings and newer material that compliments the first release. Good for them and thanks for the listen.