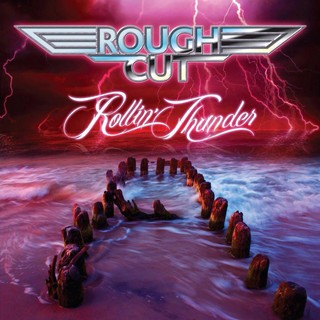 Review:
Rough Cut are a brand new band from South West England (not to be confused with a similarly named hair-metal outfit from the mid-’80s) that has already toured with Crashdiet and have a logo/album cover that screams Reckless Love — but they’re also a band that lacks the professionalism and dynamic appeal that will take them as far as those aforementioned rock groups.

“Run Home”, which kicks off their debut EP Rollin’ Thunder, is fast and furious but the vocals are all over the place — and the melody is hard to follow and not that memorable either. “Romeo’s Dead” is similar sounding, if a little catchier, but the production lacks clarity, mashing up the rhythm section and lead guitar into one relentless pounding movement. “Guardian Angel” is let down by Jack Simkin‘s coarse vocals that just don’t match the emotive side of the song. The closing track “Midnight Rider” is the best song on this EP — the lead guitar clearly marches forward while Simkin‘s voice is better suited to the fast, almost conversational, vocals.

Rough Cut are not a talentless band, but as shown on Rollin’ Thunder the song writing requires more work and, at the moment, they’re not terribly commendable.