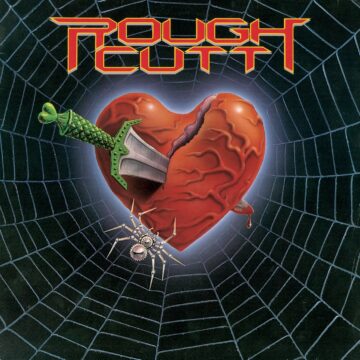 Review by Kelley Simms:
L.A. based hard rock/glam metal band, Rough Cutt, never quite caught on with the mass majority of ’80s metal fans. Although Rough Cutt displayed some of the typical glam/hair metal influences similar to Ratt, Mötley Crüe and the like, they were much heavier, especially in their early formation before the release of their 1985 eponymous debut album.

Lead-off track, “Take Her,” which was co-written by Ronnie James Dio, begins with a grooving, mid-paced riff and piercing guitar melodies. As soon as you hear Shortino belting out his raspy, one of a kind vocals, it’s clear that there was something different and cool about this band. Next track, Erma Franklin’s funk/soul love song “Piece of My Heart” — later made famous by Janis Joplin — is a somewhat odd choice for a cover tune, but it’s a decent rendition and is performed rather well, especially Shortino’s soaring vocal harmonies, while another atypical cover tune immediately follows it with Australian hard rock band The Choir Boys’ “Never Gonna Die.” “Dreamin’ Again” was the band’s attempt at the ubiquitous ’80s power ballad. Although it possesses a more darker tone and a certain charm, it falls short here. The raging, uptempo rocker “Cutt Your Heart Out” is a hard-charging affair containing some fiery trade-off guitar solos and proves to be one of the heaviest tracks on the album.

The slow-burning “Black Widow” is a dark, soulful and bluesy jam with some highly skillful basslines from Thorr. “You Keep Breaking My Heart” is another slow-yet-emotive track, while “Kids Will Rock” takes on a dash of Helix influences, yet darker and heavier with even a slight thrashy vibe with its gang-chanted chorus, while “Dressed To Kill”’s ominous atmosphere and album closer “She’s Too Hott” also contain some memorable moments. Unfortunately, consisting of two cover tunes, an uninspired ballad and a couple of uninteresting slower tracks, Rough Cutt doesn’t really knock anyone’s socks off.

Rough Cutt is one of my favorite bands from the ’80s metal era and I really liked this album when it came out, as well as their second and last album Rough Cutt Wants You!. However, Rough Cutt unfortunately misses the mark with most fans. Rough Cutt were a band caught between a rock and a hard place; they were too heavy for the typical glam/hair metal fan and not heavy enough for traditional/thrash metal fans.