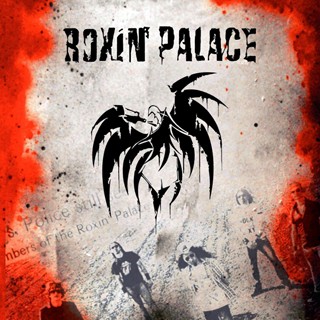 Review:
There is something special here. It’s not the album as a whole, or even one single, but rather the sum of the parts — Roxin’ Palace has a very high rock and roll ceiling. For those new to Italian rockers Roxin’ Palace their sound is heavy, crisp guitars mixed with fast drum beats and vocals that alternate from gravelly to ringing, quickly and often. Think Skid Row, but not as polished — not yet.

The album begins with “Roxin’ Palace”, an introduction to this group of rock and roll outlaws via gritty guitars and F-bombs. This is followed by “Wildest Party”, a song that sounds very ‘b-side’ Motley Crue from back in the day. Axel Lessio‘s vocals are beautiful on the sleaze-infused “Relaxin’ Shock 108°” as well as “We Are Losing Both” where he is joined by Hell In The Club vocalist Davide ‘Damna’ Moras. “Modern Middle Ages” and “Empty Virus” have cool opening riffs and “Viper’s Advice” is very glam rock (in a good way of course). “Gothic L.A.” is the “big” ballad of the album, but not to worry because this one isn’t all lollipops and puppy dogs — the intro is more Metallica versus ’80s and this works well because the song is pretty dark, and once again Lessio‘s singing is right on.

All of the songs on the album are solid, but I didn’t find my one ‘must download’ song outside of maybe “Gothic L.A.” I enjoyed parts of each track, but often the arrangements and shifts in speed got in my way (this may be more my problem — I can be a rock simpleton). Overall Roxin’ Palace‘s debut is a strong effort and fun record — however I was left wanting more, because I could hear the potential lurking. This band can do even better — something special — they just need time. I’m raising a tall glass to this band in hopes that they continue to make music, keep it simple, and don’t break-up!