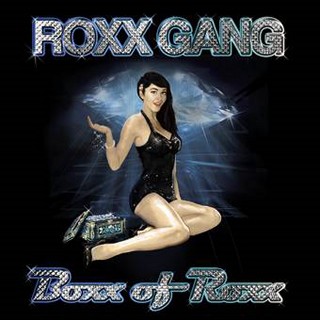 Review:
Death, murder, drugs, sex, in-fighting, and some great music… the sordid story of Roxx Gang contains it all. While the L.A. hair metal scene was exploding in the mid ’80s, a little known band from Florida got caught up in the wave despite being a little dirtier than your Poisons and Warrants. Roxx Gang frontman Kevin Steele doesn’t necessarily like being lumped in with that crowd, and while the comparisons are understandable the band had more in common with the darker side of the genre — not unlike L.A. Guns and Vain — sleaze metal merchants who were just unique enough to carve their own little niche yet not accessible enough to reap the huge commercial dividends that the ’80s offered.

Boxx Of Roxx takes us through the life of Roxx Gang, from their humble beginnings in the early ’80s to their eventual demise. The casual fan may only care about “Scratch My Back” and the criminally underrated “No Easy Way Out”, but for those that wish to dig deeper this well crafted collection is an excellent look into not just a band, but an entire musical movement.

For one, this box-set contains some of the only recordings featuring original guitarist Eric Carroll, who died under mysterious circumstances just prior to Roxx Gang getting their big break. Those three tracks display the group’s heavier formative sound, one that has more in common with W.A.S.P. (very evident on “Ballbreaker”) and early Riot than the bands and genre they would eventually be compared to. From there the classic line-up of Roxx Gang begin to drift into the sound they will always be remembered for, beginning with the sex-driven and KISS inspired “Hot Shot Of Love” and the dark riff heavy “Into The Black”.

Then we are treated to songs from the band’s long delayed Love ‘Em And Leave ‘Em album (thanks grunge) and even some recordings with current L.A. Guns axe-slinger Stacey Blades — with the best being the groovy “Seven Deadly Sins” and the slide-guitar driven “Rocking Horse”. Throw in an energetic live show from 1989, the band’s video collection including the X-rated and rarely seen “Star Trip”, some insightful liner notes, and Boxx Of Roxx becomes a worthwhile retrospective.

Was the world holding their breath for a Roxx Gang collection? I highly doubt it, but there was a lot more care and effort put into this package than I would have expected. Because of that, and because Roxx Gang should have been more than just a faceless footnote in hair-metal lore, I suggest you give this ‘boxx’ a shot.