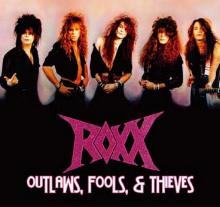 Review:
You aren’t going to discover anything new on Outlaws, Fools, & Thieves, but the album is so satisfying that you can excuse Roxx for their lack of originality. The bands claim to fame seems to be that vocalist Joey D’Angeli fronted Skid Row for a short time before Sebastian Bach, but his delivery shuffles between that of Quiet Riot and Pretty Boy Floyd.

Plain and simple this is a party rock album, nothing more and nothing less. “What’s A Boy To Do?” kicks off the album with a rough Poison sound. “Tell Me”, with it’s laid-back verse that transforms into an urgent chorus, is the best song on the disc. “Pint Of Blues” is an up-tempo song with a great rhythm and some honky-tonk piano. The Kix sounding (musically) “In The Groove” is another winner. “Turn To Gold” is the heaviest song on the album and has some killer guitar licks.

Roxx isn’t treading any new ground here, but they have released a very enjoyable album. This is the type of record one would put on while having a party with a group of women with big hair and tight spandex. You can check the band out at Perris and relive the glory days of 80’s hard rock.