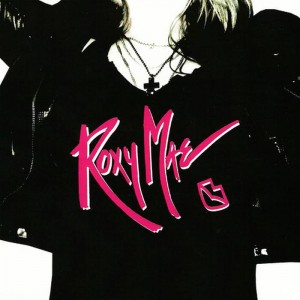 Review:
What follows is a perfect example of why I love my job so much. No, I’m not speaking to the 9-5’er but the self-appointed job of enlightening the masses to great rock n’ roll bands. Case in point, the self-titled release from Columbus, Ohio’s own Roxy Mae. Sure, they aren’t completely unknown. But Matt Starr and company sure aren’t getting the exposure their fiery brand of glam and sleaze driven rock n’ roll music truly deserves.

Starr — a self-proclaimed “mid-west misfit” — has been kicking around Columbus doing this Roxy Mae thing since 2009/2010. The band has released a three song EP in 2010 and a smattering of singles along with this 2014 album. His bandmates have changed over the years but the sentiment has stayed tried and true; play/create kick ass rock n’ roll music and the sentiment resonates on this album. Right out of the gates, you know you’re in for a long and pleasurable ride with the anthemic arena rock “Remedy” which is as sing songy as it is chock full of vim and vigor. The chorus is awesome as is the guitar solo! The remainder of the disc is heavily laden with uptempo rockers dripping with glam and sleaze influences and an epic ballad “Take Me Back” that is a true testament to song writing and what made so many budding rock stars actual rock stars back in the late ’80s the arena rock ballad. The cigarette lighter love song — nicely done indeed.

Alongside the all too catchy originals, Starr and co. lay out two classic covers. Bryan Adams’ “Run To You” and a relatively obscure Joan Jett tune called “I Love Playing With Fire.” Both covers are tastefully done staying true to the originals but also spotlighting Roxy Mae‘s abilities to thoroughly nail other writers’ tunes as well as their own. Aside from the aforementioned “Remedy,” standouts for me are, in no particular order, “Drinkin’, Smokin’, Livin’, Luvin'”, “Keep Rockin'” and “I Want You” but the disc spins regularly and repeatedly and I don’t skip a song.

Starr is certainly a proficient singer, guitar player and songwriter. His bandmates are no slouches either mind you. There isn’t a song on this album that I haven’t thoroughly enjoyed and sung along to from the first spin onward. Since the release of this album, Roxy Mae have released a couple of singles that don’t deviate from that glam slam sleaze driven rock n’ roll foundation they have adhered to for over five years. Quality stuff all around and it should appeal to many. Enjoy! I know I did!