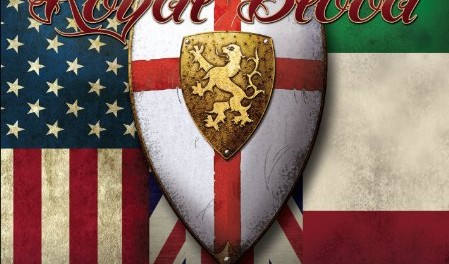 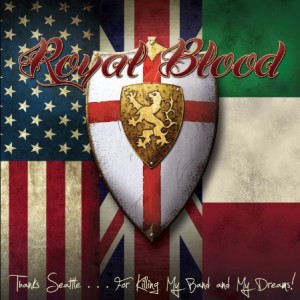 ROYAL BLOOD
THANKS SEATTLE… FOR KILLING MY BAND AND MY DREAMS!
Released on June 20, 2011 (FNA Records)

Review by Bobby Caughron (September 2015):
Let me start by saying that most of our CD reviews on Sleaze Roxx are current or recent releases. And, rightfully so. As reviewers, we are trying to give readers our take on something that you probably haven’t heard before. Recommending the good and possibly saving you a few dollars on something that might not be as good as you thought it would be. So why am I reviewing a release from 2011? Well, one reason, really, which is I would bet that most heavy metal fans are still not aware of this band and have not heard of it before even if it was reviewed by Sleaze Roxx back in March 2012.

I started collecting music at a young age and have continued for the last 30 some years. So, I would consider myself to be quite the connoisseur of eighties’ style metal and hard rock bands. I’m one of those guys that everyone knows. I have almost as many obscure bands in my music rotation as I do the popular, well-known artists. A so-called die hard metal head and metal nerd at the same time. So, it’s not often that I find a hidden gem such as this album by Royal Blood. I’m not sure how I missed this release, but I am so glad that I found it now. Better late than never.

So, here’s how the story of this band goes… Poised to be the next hot band during the era of MTV, Royal Blood turned down numerous recording contracts back in 1991, holding out for the best offer. They basically waited too long. The Seattle scene and the grunge movement came along and took them from being the next superstars to being out of style in an instant. I had enjoyed Grammy Nominee, Alex Masi‘s virtuoso guitar style on albums such as Fire In The Rain and Attack Of The Neon Shark as well as his many other solo albums. I would definitely say he was an underrated metal guitarist who was a victim of the changing times. Back in the early nineties, I listened to a lot of bands that should have made it big and didn’t such as Heaven’s Edge, Hericane Alice, Lostboys, Sleeze Beez, Baton Rouge and Electric Boys just to name a few.

When I took this CD for a spin, the first thing that I noticed, is that it immediately transported me back to that time. You see, this album was made before grunge and the alternative rock sound had made its way into most metal bands’ sound that were trying to adapt to what the record companies were looking for then. I can’t say enough good things about this album. Every track is outstanding and a snapshot in the history of metal at the same time. The vocals are exceptional, the guitar solos are blistering and the bass is in your face the whole time. Rather than give this a track by track breakdown, I’m just going to rate the whole album as a “five star” affair. The only thing that I don’t really like about this album is the title. I mean, I understand the sentiment they are trying to convey, but I think I would have much preferred it to be a self-titled album, as I find the title a bit juvenile and not up to par with the quality of the music represented. But, hey! That’s a minor thing and the music is really what’s important here.

If you miss the classic period of heavy metal, this album will bring you back to the golden era. I still cannot for the life of me, understand how I missed this when it was initially released, but I am absolutely ecstatic to have it now and to recommend it to any and all eighties metal fans out there.

Review by Skid (March 2012):
I get a chuckle from the title of Royal Blood‘s long-lost debut album. Sure people like to blame Seattle, and the evil three-headed grunge creature that chewed up and spit out hair-metal bands at will, for the death of ’80s rock, but I’ve always viewed that as a cop-out. The real culprits to the demise of ’80s heavy metal were the bands themselves and the record labels who signed everyone who had long hair and pretty-boy good looks. It became predictable and repetitive — release a hard rocking song as the first single, follow it up with a sappy ballad, and make sure you look cute in the accompanying videos — no wonder the wheels were about to fall off, and grunge just happened to be in the right place at the right time.

Groups such as Royal Blood are as guilty as Seattle for killing the hair-metal genre — not because they are bad, but because there were countless other bands around at the time with the same sound. OK, maybe I’m being a bit harsh here, because Royal Blood did have an ace in the hole with guitar virtuoso Alex Masi, but even with his fingers flying up and down the fretboard, it doesn’t change the fact that these guys sounded a lot like Y&T. Because of that, Royal Blood came across as an early ’80s band despite forming and recording these songs in the early ’90s — in the music industry timing is everything, and this four-piece was five to ten years behind schedule.

The 16 tracks on Thanks Seattle… For Killing My Band And My Dreams! are demos, but the sound quality is great. As the band states in the liner notes, a proper release back in the day probably would have taken these ideas and narrowed them down to about 10 songs, and judging by what I’m hearing it would have resulted in a hell of an album. With Masi showing off his skills, only a handful of times getting too fancy at the expense of the song, MSG‘s Rocky Newton pounding away at the bass and Golbach‘s golden voice, which is tailor-made for hard rock just like Dave Meniketti‘s, Royal Blood had heaping amounts of talent. Along with killer compositions like “Angel Of Love”, “Boys Get Tough”, “Every Dog Has It’s Day”, “Tear It Down” and “Outrageous”, Royal Blood not only had the chops to compete with Y&T, but also several other of hard rock’s legendary staples.

If you stripped a few fillers from this album (goodbye “Groove Thang” in particular), and released it in 1984, we could be here today lumping Royal Blood into the same influential cult category as Y&T — I have no doubts about that. As it is today, Thanks Seattle… For Killing My Band And My Dreams! doesn’t offer much in the way of originality but makes up for that with endless guilty pleasures. This album really does take you back in time and makes you long for the days when music was played at full volume in a haze of hairspray. Thanks a lot Seattle… you boring and depressing fools!