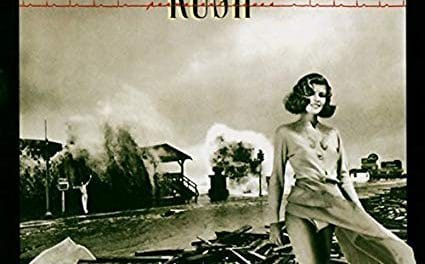 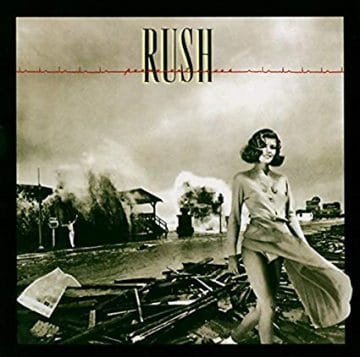 Review by Andrew Maxey:
In the popular Rush documentary Beyond The Lighted Stage, the band frequently made the claim that Hemispheres was the album that broke the camel’s back in terms of complexity and pushing the group’s progressive limits. Songs like the title track (or more formally “Cygnus X-1 Book II: Hemispheres”) and “La Villa Strangiato” were musical journeys eclipsing the nine-minute mark through their wandering instrumental parts. The two shorter songs on the album, “Circumstances” and “The Trees”, are still well regarded in the rock community as being strong songs as well and fan favorites of Rush fans. Rounding out the decade, Rush began to record an album with much more of a pop influence with shorter songs that could be more easily digested by the general public that were not as well versed in long, epic progressive arrangements.

Outside of being burnt out from touring and their typical, long-form arrangements, the band was also ready to have a recording session where the pressure was not so severe. They accomplished this goal at Le Studio in Quebec where the environment was described as a “wonderful place, nestled in nature1” by Neil Peart in the Permanent Waves tour book. This mentality inspired a different vibe than the brooding Hemispheres and offers more hopeful lyrics and brighter sounds.

One obscure comparison that comes to mind for Permanent Waves for myself is World War I. In many ways, WWI was the last “old” war encompassing the use of cavalry and hand to hand combat tactics but was also the first “new” war as well due to the use of aircraft, aircraft carriers and machine guns. I would contend that Permanent Waves is similar in that regard. It is typically seen as the beginning of the more synth-heavy era of Rush that thus indicating the “new” direction of Rush and a precursor of things to come. It also features some “old” techniques that got Rush to where they were at that point. “Natural Science” feels like it could have fit on Hemispheres. “Different Strings” could have been on any of the older Rush albums but would fit nicely on 2112 in place of “Tears.” “Jacob’s Ladder” was even compared to a “typical Rush song” at that time by Alex Lifeson in a magazine interview!

The album spouted songs unlike Rush had previously attempted at the same time. Songs like “The Spirit of Radio” sparked the bands foray into Top 40 radio at the time. “The Spirit of Radio” reached pop charts all over the world eclipsing their best single to date “Closer To The Heart” from A Farewell To Kings. The intro is unmistakable among rock fans as well as the intentional reggae riffing during the infamous “and the words of the prophets…” break.

Outside of “The Spirit of Radio”, the album also included many songs that had strong pop sensibilities such as “Freewill” and “Entre Nous.” Those two songs are my two choices to use when trying to get somebody interested in the band that has not heard them before. Being a 27-year-old fan, this situation has happened more than a few times when trying to profess my affection for hard rock to somebody that listens to Post Malone or Lizzo. Many of us have been in that situation before when we are trying to recommend music to people that have not been exposed to it. In these situations, you have to go with something that is a little closer to what they listen to so typically 2112 is not your best option.

The album artwork is interesting when looking behind the scenes of the Canadian model featured. The newspaper on the cover includes a variation of the classic “Dewey Defeats Truman.” Another interesting feature is that each member in the band has their name in the background on the billboard style signs. Their long-time artist Hugh Syme is the man that is pictured waving in the background of the shot.

Overall, the band accomplished a great deal with the release of Permanent Waves. They had exposed themselves to a legion of new fans with isolating many of the old ones who were used to the longer songs that were more progressive. Rush also created a nice segue into Moving Pictures, which ended up being the top selling album of their career.

Review by John Lewis:
Before going any further, I would like to offer my personal condolences to all related in any way to the recently departed Neil Peart. Shoes that will never be filled; may he rest in deserved peace.

I remember the release of this one very well. I was a 16 year old student in Pembroke, Ontario, and an absolute Rush fanatic. I was still on a high, having seen the band in December 1978 at my first real rock concert! On the day of the Permanent Waves release, a friend and I took the bus to Ottawa for the day, skipping classes, and I bought a vinyl copy of the record at Treble Clef Records. The grey imagery of the album cover seemed to nicely capture the aura of the Canadian winter in which it was released.

Rush had just completed the lengthy world tour cycle for its’ previous album, Hemispheres, and the band felt that it had taken its epic songwriting style to an extreme. Hemispheres had been a real challenge to record, and a move toward shorter, more concise songs was the way forward. After taking a six-week break from each other, Rush (Geddy Lee, Alex Lifeson and Neil Peart) convened at a cottage in rural Ontario to begin writing new material. Prior to recording, the band performed some warm up shows, and debuted new songs “The Spirit of Radio” and “Freewill.”

Rush’s previous two albums had been recorded in Wales. This time out, they worked closer to home, at Morin Heights Studio in Quebec. Long-time band producer Terry Brown manned the boards. Even the album’s title reflected the band’s state of mind. Released at the height of the ‘new wave’ music movement, Rush felt that its music represented something more natural and permanent, hence Permanent Waves. The change was evident immediately. I can still remember being shocked when first hearing the album the day of its release. Lean, clean, even mean here and there; this was a whole new Rush, moving away from an increasingly bloated prog-metal style to a stripped down new machine. Opening track “The Spirit of Radio” represents the fresh new style well — incredibly catchy, featuring a snaky guitar signature riff from Alex, interesting modern triggers on the chorus, and even a cool reggae break. And still rocking as hard as anything the band had done before. Next song, “Freewill”, is written in the unusual key of F, and totally rocks smart & hard.

One thing that is now so apparent is the brilliant production; all three of these virtuoso musicians are captured beautifully. The solo section on “Freewill” is fantastic, Geddy’s snarling bassline supporting a blazing solo from Alex. “Jacob’s Ladder” is one of the heaviest Rush songs ever with lots of muted power chords and an epic, pounding conclusion. Side two of the vinyl release sees the band stretching out a bit more. “Entre Nous” is a smooth mid-tempo rocker with a restrained chorus and beautiful, emotive lyrics from Neil. “Different Strings” slows things down with more emotive lyrics, and Alex excels on a scorching guitar solo which outros the song. Brilliant. Finally, the band closes out the album with an epic, the three-part “Natural Science.” Although lengthy, the song has a different feel from previous long Rush tracks, the sparse but sparkling clean production really brings this song’s dynamics to the forefront.

Unfortunately, Ontario was one of the few provinces left off of the Permanent Waves tour itinerary, to the disappointment of this 16 year old. The band played a phenomenal four nights at New York’s Palladium and five nights at London’s Hammersmith Odeon. Keeping with recent tradition, Rush will be releasing a 40th year anniversary edition of the album later this year. I am excited! There are rumours that a previously unreleased concert from the tour will be one of the bonus inclusions. I can’t wait to add it to my collection!

Rush‘s “The Spirit of Radio” live video (from Snakes And Arrows album):

Rush – The Spirit Of Radio (From “Snakes and Arrows”)

Filmed in Rotterdam on their 2007 tour in support of the Snakes And Arrows album, this DVD captures Rush at their very best in front of a fervent Dutch audience. Rush are one of the most successful rock acts of all time with worldwide album sales estimated in excess of 40 million units and with a line-up unchanged since 1974.