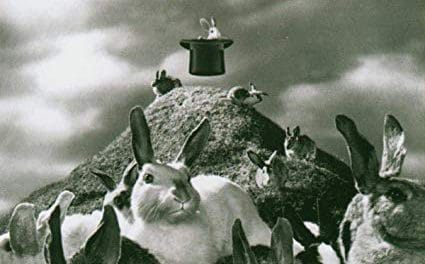 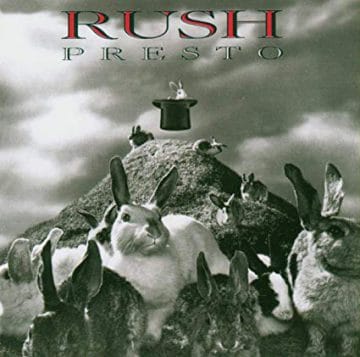 Review:
Presto was the first Rush cassette I ever bought because I never needed to buy any of their music. When I would hang out with my high school friends, they had every Rush cassette. Much like the scene in the 2009 movie Fanboys, where the characters start their road trip to sneak into Skywalker Ranch, the one character looks at the cassette case in the driver’s van, and sees the selection is nothing but Rush. This was similar to my friends whenever we would ride in their cars to either church, cruising around town, or going to the roller skating rink. “It’s Rush all the time,” as quoted from the movie, so therefore, I never needed to go out and buy a Rush cassette or CD, because it was always being played around me. Even my brother’s college friends played Rush when we would get together to play role playing games.

Musically, I have always respected the band, being a drummer myself. I listened to more radio friendly music growing up in the 1980s, like KISS and the top 40 radio acts that were being played, and was not into Rush lyrically as much, with their references to science fiction, and the other topics that they covered. My buddies would sit and dissect the meanings of drummer Neil Peart‘s lyrics as if there was a prize given out if they got the correct answer, while I settled for lyrics and songs that was more relatable to me, such as love and relationships, or dealing with wanting to chase dreams of being in a band. I have to say that Presto is one of my favorite Rush albums because of it being my first bought cassette from the band.

The album starts with “Show Don’t Tell,” the song that made me run out and get the album after seeing the video on MTV. For some reason, this song resonated with me, with it not being the typical Rush song that I remembered. It had a more guitar edge to it, while having a radio friendly style to it. The lyrics referenced a court room, with the actions speaking louder than words theme, along with the great opening of the song. Drummer Neil Peart and guitarist Alex Lifeson‘s syncopated groove opened my eyes and ears. There was also the sing-a-long catchy chorus echoing “Show me / don’t tell me” that also caught my attention.

“Chain Lightning” has a great guitar groove to the song, with the opening line “Energy is contiguous / enthusiasm spreads” which fits the song perfectly. The chorus has a mellower side to the song, compared to the stronger driving verses, which is in opposite of many songs, that have a mellower verse then brings it up in the chorus, which gives a unique appeal for me. Lyrically, the die hard Rush fans can enjoy the atmospheric mention of sun dogs and lunar gravitation. The guitar solo during the instrumental adds a nice tone to the driving sound.

“The Pass” is one of my all time favorite Rush songs. I admit I have always been a sucker for ballads, but this song on the topic of teen suicide, gives a positive outlook to a serious topic. I loved the lines “No hero in your tragedy” and “No salutes for your surrender.” There is a line in the song that states “Someone set a bad example / made surrender seem alright,” which hit home with me. Everyone has dealt with being the outcast or being alone in the world at a certain time, and this song helped me even in my college years, and gave me the strength to keep fighting. Even though the band has not been a supporter of religion, me being a Christian, there are several songs on this release that helped me, and because of my faith where I took a different meaning to the songs. This is one of them. The video of the song (being the second single from the release), about a young man being alone around his schoolmates, also enticed me loving the song, where other videos from the band were either them just playing, or had something that I did not comprehend, let me really dig this album. The band was getting into more of the concepts of videos to appeal to the masses.

Track four, “War Paint,” goes back to a mid-tempo feel, coming out of the ballad. The drumming on this song has power, much like a war rhythm, without having to sound like a march. There is a different tone in the guitar solo than in the other songs so far, with a more clean sound to it. The lyric of “The mirror always lies” is also a strong statement, however the listener wants to interpret the lyrics. Bassist Geddy Lee playing carries the next song, titled “Scars.” This song has a mystical style tone to it, along with the drumming not in a typical straight beat throughout the track. This has a classic formula of Rush, with the band’s disregard to the basic format that the drumming and other instruments has to be in a certain rule (playing straight beats, etc.). This gives the band its appeal to many. The song is not as radio friendly as some of the others on the release.

The title track “Presto” has an acoustic sound to it compared than the others so far on the record. This is a more peaceful, gentler sound, with the synthesizer in the background adding an extra emphasis to the overall sound. Again, the drumming is not playing a straight beat until into the second verse. “Superconductor” is a song I used to skip when I had the cassette, but I have grown to like this song more. It’s hard to like every single song on an album at times, and I would never say skip a Rush song, because you can find so much going on in their music. The synthesizer is more heard on this track, especially during the instrumental part, and has a rhythm to it that grooves. When listening to some of the earlier albums, one thing that I had a problem with was Lee‘s high vocal range at times (I have respected it later on), and there is not a lot of higher ranged songs on this release, which also gave me an appreciation the versatility of  his voice. This is one of the songs my pals and I would listen to frequently while cruising in their cars.

Another of my all time favorite songs by the band is track eight. “Anagram (For Mongo)” is a song we used to play at our church functions. Every once in a while, our youth group would have lip-synching contests, but the songs had to have approval beforehand due to lyrical content. My buddies and I would “perform” this song many times during these contests. Although bands like Rush and Styx were one of the many acts the church was negatively vocal about (even Stryper at our church), this song we always got to play. Once again, the listeners can take different ideas from the songwriter (which what makes music so great — it reaches each listener differently), this one had (to my ears) references to The Last Supper, which the lines “There is no safe seat at feast” and “The saint is turning to sin” with the reference to the Judas betrayal. This song has so much in it; from the driving groove of the music, to the poetic lyrics (“Image just an eyeless game”), to the synthesizer adding a piano sound to it. Rarely can an album have more than one song on it that becomes a listener’s all time favorites, but Rush does it again with this song for me.

“Red Tide” starts off mellow during the first verse and then kicks in afterwards, with the symbolic calm before the storm flavor to it. The dynamics in the song is wonderful, along with the guitar solo from Lifeson (right after the instrumental and bridge) which comes out of nowhere, just like the warning sirens are no longer a watch, but a warning that the impact is right down the road. “Hand Over Fist” has a catchy chorus, with its references to the rock / paper / scissors game many of us played as children. Lifeson‘s guitar work throughout the song is pleasant listening.

The final track , “Available Light,” starts off with an R&B / soul style during the verse. I don’t remember listening to this song much when I got the cassette, or with my buddies, but my first thought listening to it now for this review was “Wow! Rush meets Prince” at the beginning. Once again, the different styles these guys can play is amazing, while filled with the time changes and wonderful lyrics, made the band members, true artists. Another part I noticed about the song was how the lyrics here are more of a classic Rush style to it, compared to the rest of the album. The words here have a mythology / epic style to it (like “Beowulf”), where the rest of the songs have either a relationship or a science theme to them. The line “The wind can carry all the echos home to me” could have been found in any of my college Medieval literature books (I have a degree in English).

Presto was the first release from Rush for Atlantic Records, and it gave them a new audience, thanks to the MTV exposure. There were several fans that left the band before this with the Power Windows and Hold Your Fire albums, where there was an emphasis on more keyboards (I remember my buddies, who bought every Rush album, complaining about the Hold Your Fire album constantly). For music listeners like me, who were not into albums with 30 minute sides with three songs on them, this was an introduction to a modern day Rush band, and it had great success. There is not one bad song of the release, nor one that I would recommend to skip over. Not only does Presto provides me with great memories of my teen years with my friends, but it gave me a bond that we could relate to, whereas their previous albums, I had to be in a certain mood to listen.

Geddy Lee, Alex Lifeson and Neil Peart waved their magic wand with Presto and not only scored with providing the magical flourish, but also sent this audience member to give a standing ovation.

Production:
Produced and arranged by Rush and Rupert Hine
Engineered and mixed by Stephen W. Tayler
Mastered by Bob Ludwig