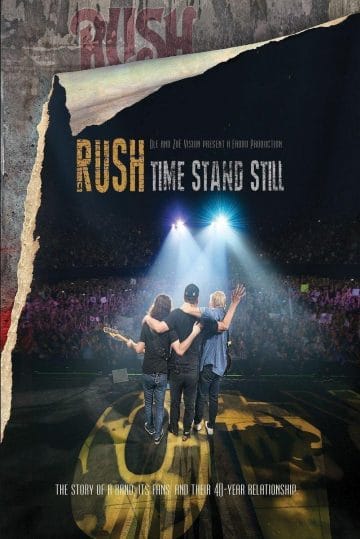 Review:
In 2010, Sam Dunn’s documentary ‘Rush: Beyond the Lighted Stage’ was released. The film told the story of the Canadian trio from their inception through the [then] present. Dunn did an excellent job telling the story of Rush and brought them to the attention of people that might have otherwise only known radio hits like “Tom Sawyer” or “Closer To The Heart.” Which brings us to the present day — as a fan, you know Rush ended their career in 2015 in Los Angeles — the last show of their North American tour.

We shouldn’t be surprised that the band documented its final tour. When it was publicized that Rush would issue a new documentary, I assumed it would be exclusively ‘the tour.’ The new documentary titled Time Stand Still culls [some] footage from the 2015 tour and some interviews with the band where Geddy Lee, Alex Lifeson and Neil Peart [once again] retell stories that even the most casual of fans are aware of at this point in time. You toured with KISS, you used a station wagon on early tours and then upgraded to an RV. Really ‘cringe’ type stuff if you’re familiar with the band’s history. Time Stand Still mixes things up a little by including footage of fans that share their admiration and love for Rush.

Unfortunately between Rush retelling the stories of the ‘early days’ and Rush geeks proclaiming their affection for the band, we got short changed. It would have been great to have heard and seen more footage of the R40 Tour. The documentary winds down with the band shutting the door on their career as a result of all of the aforementioned. I was left unsatisfied. Not because I’m in denial that Rush are ‘done’ but because I wanted to see more of the ups and downs of the R40 Tour. I get that they [Rush and the director] went the route of tipping the hat to the fans but I want to see more of the band than ‘other fans.’

The extras on Time Stand Still are a bit suspect as they’ve included live footage from the Presto tour which was ‘great’ in its time. Looking back at that footage now — it wasn’t so good. All in all, Time Stand Still is worth watching if you’re a casual or diehard Rush fan. Rush: Beyond the Lighted Stage is simply superior.