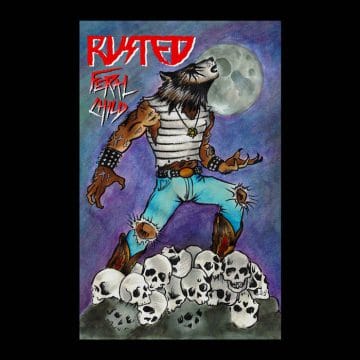 Review:
Sleaze Roxx usually does not review “singles” but I am going to make an exception here because as soon as I heard Rusted‘s new single “Feral Child” on cassette (I’ll get back to that), I thought that it encapsulated everything about Rusted in that one song. In addition, the unidentified bonus track, which turned out to be an acoustic version of KISS‘ “Hide Your Heart”, blew me away.

Things have been rather quiet for Canadian French rockers Rusted during the last few years so it’s great to finally get some new material from them. Back in 2014 when I first “discovered” Rusted via their full-length album Rock Patrol and upon seeing them put on a great live performance in Toronto, Ontario, Canada (in the back of a sushi restaurant of all places), I was sure that I would be seeing a lot more of them. I believe that Rusted played one more time in Toronto shortly after but I missed that show for a reason that escapes me at this time. In any case, Rusted went on to do a mini-tour of Europe and released the very good acoustic album Restless Gypsies in May 2015. I was expecting the group to release a live album shortly after and a new studio album the next year. Rusted‘s live album Live, Wild & Free ended up getting delayed and only released in December 2016 along with one new studio track “Hittin’ The Road.” Although it was a long wait considering that the live album was getting mastered when I interviewed Rusted‘s frontman Tony Rust back in July 2015, Live, Wild & Free was totally worth the wait as it truly is an exceptional live album that really captures Rusted‘s live energy.

From there, things seemed to go at a snail’s pace with Rusted. Singer Tony Rust ended up being a contestant on the Quebec television show La Voix 5, which is the equivalent of The Voice early 2017. Rust didn’t make it all the way to the end but definitely turned some heads with his performances on La Voix 5. In March 2018, Rust advised me that Rusted were indeed working a new studio album but weren’t imposing a deadline on themselves to finish it as they wanted it to be the best possible record they could come up with. Rust suggested a possible release date of fall 2018 but that year came and went with no new material from the band. Finally, earlier this month, Rusted released a new cassette single titled Feral Child. Thankfully, I still have two cassette players so although the chosen cassette format is somewhat outdated, at least I can still listen to the new single with bonus track in physical format.

The track “Feral Child” seems to be like a summary of all that Rusted have to offer in one song. You have great melodies, guitar solos that reminds me at times of Iron Maiden, Rust‘s unique French Canadian laced singing, and some nice harmonies (“Ooh oh oh oh”) and background vocals. The song is simply a very enjoyable one but lacks a certain something to put it over the top as a true anthem, which is a bit of an issue on a lot of the Rusted song repertoire. I’ve got to say that I was really curious to see what the bonus track would be. The cassette cover simply describes the song as a “Bonus Track.” As soon as I heard the opening, I immediately thought ‘I know this song.’ At first, I thought it was a Bon Jovi cover before quickly realizing that Rusted were tackling KISS‘ “Hide Your Heart” acoustically. If you have heard some of the acoustic songs that Rusted have released over the years including their cover of John Lennon‘s “Imagine”, you know that these guys are quasi-masters when it comes to playing acoustically. Rusted‘s rendition of KISS‘ “Hide Your Heart” almost gave me goose bumps and sounds quite a bit different from the versions that KISS and Ace Frehley have released.

Rusted just recently released their cassette single Feral Child but limited it to only 100 cassettes. Last time I checked the group’s Bandcamp page, it seemed that there were still a few cassettes available and you get quite the deal with it as you also receive a download card to obtain Rusted‘s Hit By EP, their album Rock Patrol and their acoustic album Restless Gypsies. All I know is that I am really looking forward to Rusted‘s next studio album, which could potentially include the very good singles “Hittin’ The Road” and “Feral Child.”

Production:
Produced by Rusted
Mixed and mastered by Kevin Jardine