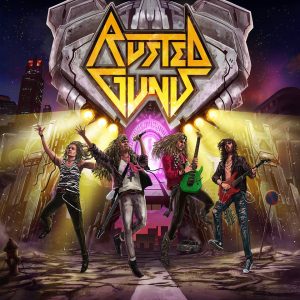 Review:
Days like today make me so happy to be able to share my words with you fellow music appreciators and of course it is especially pleasing when (1) it is of a band that (unfortunately) a select few would otherwise never know of, even though this is a travesty and (2) when the band is as bloody brilliant as Rusted Guns!

Rusted Guns are a four piece of ’80s glam and hard rock influenced lads hailing from Aarau, Switzerland. From the hand drawn vintage album cover to the band’s photo of its glammed up teased out personas, one will only be able to come to the conclusion that this should be good and of course, this assumption is cemented immediately within the first 10 seconds of the album’s opening track “Never Die.” A hard rock number with wailing guitar riffs (the intro is supremely tasty), epic arena styled drum pounding and Lucas Widmer‘s period perfect vocals that will immediately transport you back on high to 1984, where you will remain for the remaining five cuts from this self titled EP.

Rusted Guns‘ influences are displayed in spades for the next track “Nice Boys Play Hard” which is a swagger filled rocker filled with killer lead guitar work and lyrical content that is dripping with sexual innuendo and just plain in your face bluntness. As the chorus tells us “Nice play hard, with a swollen cock, they know their part.” “She’s On Fire” continues this aural glam induced hard rock rampage with its heavy riffs, massive chorus and the lyrical content of all our favorite songs — you guessed it chicks. Specifically ones far too hot for the likes of ourselves. “Cock Your Guns” — another in the series of rockers with supremely infectious music and a theme touting Rusted Guns as the threat you should watch for when it comes to the glam rock gauntlet they are throwing down and more than willing and able to defend. “Time Has Come” continues the ass kicking theme from “Cock Your Guns” praising the ’80s, its influential scene, the bands that made it and of course the next wave of rockers, of which Rusted Guns are riding to domination by unearthing the vintage sound of their fallen and forgotten heroes. The EP’s closer is “Shit On The Wall” — another glam/sleaze rocker that is chock full of whammy tricks, cow bell and of course that trademark swagger and musical prowess that has been proficiently carried throughout this EP.

Rusted Guns will be greatly appreciated by fans of ’80s glam metal bands in the ilk of XYZ, Great White (early), Babylon A.D., Y&T and a plethora of lesser known sunset strippers of that time frame.

I hope it is blatantly obvious that I am completely smitten by Rusted Guns and their EP. For me, it captures all the elements of the scene I grew up in. For a new band to transport a listener to a simpler, happier and better time and to do it with originality, competency and a fire that places them in the forefront is a no brainer for me. Buy the EP, support the band and let’s encourage them to keep making the music that brought us all together here in the first place.

Reviewed by Terry Martinson for Sleaze Roxx, May 2016