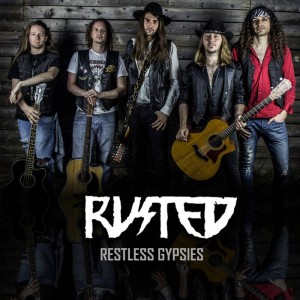 Review:
Bucking the trends and forging your own path can sometimes be the key to success. One band that is creating its own path is Montreal, Quebec based Rusted. Not only is the group working on releasing its first live record after having only released one full length record, 2013’s Rock Patrol, and a debut EP, 2010’s Hit By, Rusted have just released Restless Gypsies, which is a collection of acoustic versions of six of their original songs along with three new tracks. With Maniak, one of their guitarists, still based in France while the rest of the group remains in Canada, Rusted have just come back from their first European tour. Clearly, this is a band that does things differently.

Releasing acoustic versions of hard rock songs is always a risk because it puts extra emphasis on the lead singer’s vocal abilities and songs as a whole. In Rusted’s case, this is a good thing because lead vocalist Tony Rust more than lives up to the challenge with his singing and some of the songs really come alive in their stripped down acoustic format. The one that really comes to mind is “Wanted Man Boogie”. I must confess that I was really hoping that Rusted would tackle that track on Restless Gypsies when I heard that they would be releasing acoustic versions of some of their past original songs because the song has so much potential. From the infectious boogie feel to the awesome stripped down guitar solo, ‘Wanted Man Boogie” is the best track on Restless Gypsies.

For those who have read some of my past reviews, you’ll know that I am usually not crazy about many ballads but I really like the slower tracks on Restless Gypsies including “Traveler” which emanates from Rusted’s debut EP Hit By. As I have said in the past, if Rusted had come out with their brand of music back in the 80s era, they would most likely be a household name with some of the other bands from that era because tracks such as “Rock Patrol” and “Young Wild & Free” have “hit” written all over them. Not surprisingly, these two tracks sound fantastic in their stripped down acoustic formats. The one original prior track that I find that does not work as well from an acoustic standpoint as I would have thought is Rusted’s power ballad “Last Stand”. It is not that the acoustic version of the song is a bad one by any means. Perhaps I was just expecting such big things from the song since I really liked the version of “Last Stand” on Rock Patrol.

This takes me to the three new tracks offered by Rusted on Restless Gypsies. “Girl From…” is an enjoyable track with a nice chorus and complementary background vocals. “Without A Goodbye”, whether good or bad, reminds me of a Poison song and is probably the second weakest track on the record although it does have some good moments with its “wo-oh-oh” parts. The weakest track is the album closer “Hurt” which just has too many unnecessary background vocals accompanying Rust’s vocals. I would have liked to have Rust sing most of the song rather than have someone accompany him singing on most of the track. In a way, it is not surprising that the tracks that I enjoy the most are the ones, which I am the most familiar with. However, I was really not that familiar with “Midnight Man” or “Traveler” which originate from Rusted’s debut EP Hit By and I find those tracks to be stronger than the three new tracks offered by the Canadian group on Restless Gypsies. I have to give kudos to Rusted for releasing something different in this day and age. Restless Gypsies offers a different side to Rusted and really shows how good these young guys are at writing catchy and memorable songs.  You can check out Restless Gypsies on Bandcamp.

Production:
Produced by Rusted and SWS
Mixed and mastered by Jonathan Lefrancois-Leduc