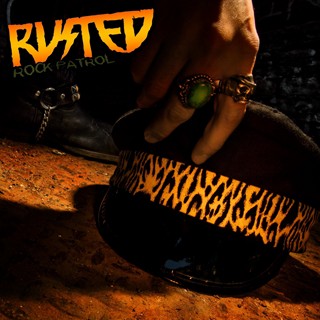 Production:
Mixed and mastered by Jonathan Lefrancois-Leduc. Produced by Rusted and SWS. Produced, recorded and mixed by Pierre Baz Bazinet (13).

Review:
For any band that thinks touring is not one of the best ways to win new fans, my first encounter with Rusted was based solely on them committing to make the trek from their hometown of Montreal in La Belle Province (Quebec) to Toronto. Hessler‘s second leg of their ‘Ghost Dance Summer Tour’ included a stop in Toronto, and given that Rusted were scheduled to play most of the gigs with the Chicago based rockers I thought that I would check them out prior to the double bill juggernaut making its stop here.

Having only heard the song “Young, Wild & Free”, I instantly elected to get any music the band had up for grabs. If every Rusted song was as good as “Young, Wild & Free”, I was in for a real treat. Although the group’s website indicated that they had an EP called Hit By and a full-length called Rock Patrol, only the latter was available to buy. After ordering Rock Patrol, I contacted the band via Facebook to inquire about the EP, and surprisingly they were kind enough to include a copy of Hit By with my purchase.

Rusted are likely the only “new” band that is completely unapologetic about sounding like a metal band from the ’80s. Not only do they sound like an ’80s glam metal band, but they have also adopted all of the clichÃ©s from that era — from the leopard prints, to leather pants, to flowing bandanas. Although the Canadians borrow heavily from the ’80s metal era, the good thing is that they don’t sound exactly like any one band in particular. After listening to Rock Patrol for the first time, one of my thoughts was that Rusted sounded similar to Steel Panther in terms of catchy hooks and melodies — but without all of the sometimes ridiculous sexual tales.

The title track is a true winner that if released back in the ’80s would have undoubtedly put Rusted on the map and almost singlehandedly got them a record deal. Quite simply, “Rock Patrol” has all the elements of a great song while keeping things simple, from the basic but infectious first riff, to lead singer Tony Rust‘s opening wail, to the slower chorus which would surely incite lots of fist pumping and singing along at a live gig. Throw in some memorable solos from guitarists ManiaK and Tommy D. Eagle and you have the recipe for a hit song — so it is no surprise that they have recently released a video for “Rock Patrol”. Frankly, all of the songs on Rock Patrol are quite good — except for the ballad “True Eyes Of Love” which I do not like — and take me back to that amazing ’80s era where catchy hooks, melodies and harmonies were essential trademarks of any metal record. My other favorites are “Wanted Man Boogie”, with its soaring guitar solos, the catchy power ballad “Last Stand”, “Tsunami”, with its “yeah — ee — yeah” sing along, the speedy “Two At A Time”, and of course “Young, Wild & Free”.

The one thing that plagues Rock Patrol throughout is that the production and sound quality are not the greatest. When I think of those great glam metal records from decades pasts, they were often well produced to overproduced which resulted in the sound really jumping out at you. Rock Patrol on the other hand sounds a little too raw for the kind of music that Rusted is playing — but this might be more due to budgetary and time issues than anything else, as I understand it took only three days to record their EP and I suspect Rock Patrol may have been recorded under similar constraints. Had I not been from a French background myself, and not known that the band originates from Quebec, I probably would not have noticed but I do seem to detect a slight accent to Tony Rust‘s singing. In any case, it is quite minor and hardly noticeable — some people might even find it charming.

Rusted‘s Rock Patrol is full of infectious melodies and catchy songs. Whenever I am in the mood to hear some glam or hair metal, I will definitely be putting Rock Patrol on for a spin.