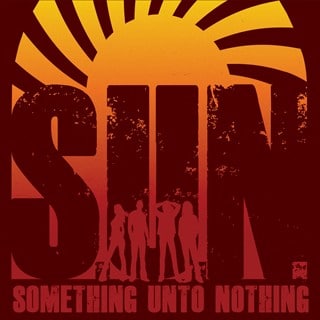 S.U.N.
SOMETHING UNTO NOTHING
Released on November 20, 2012 (Robo Records/Waterfront Entertainment Group)

Review:
There is no doubt that my expectations were quite high for the latest ‘super-group’ S.U.N. (short for Something Unto Nothing), essentially consisting of Canadian legend Sass Jordan on vocals and ex-Whitesnake drummer Brian Tichy on guitar. Really, it’s not that much of a super-group given that Jordan‘s better days have been well behind her for about 20 years since the release of her first three pop-rock oriented albums (Tell Somebody, Racine and Rats) and Tichy has been mostly known as the hired gun/drummer for the second last Whitesnake line-up concocted by its founder David Coverdale. What made, or makes, S.U.N. interesting is that Tichy decided to quit his “comfortable” gig with Whitesnake to create — and invest himself at 100% to either rise or fall with — his own group. Rounding out the band is bassist Michael Devlin, who has kept his gig with Whitesnake, and drummer Tommy Stewart.

S.U.N.‘s self-titled debut CD is exactly as advertised — it is rough around the edges, trend-free, and a straight-in-your-face type of rock. Apparently the album was written in only two weeks in an old deserted shack in the mountains of Canyon Country. Although S.U.N. wanted to write trend-free music, if you just picked up the CD without knowing anything about the band, you would likely think that this is a classic rock album from the ’70s, and in essence Something Unto Nothing takes you back to some great ’70s era rock ‘n’ roll. What makes S.U.N. so good is that the band sounds like a band — you have Jordan‘s stellar raspy but commanding vocals, Tichy‘s great guitar grooves, and a fantastic rhythm section. In addition, the band provides a raw sounding album with little polish and a real nice live feel to it — the disc actually sounds more “live” than many live albums out there!

Something Unto Nothing kicks off with “Burned”, a great opening track which gives the tone for the rest of the CD — songs built around great riffs and Sass Jordan‘s unique vocals. The next two songs, “Crazy Head” and “Nomad”, are also good ones but the one standout track, which can inexplicably only be found at track 11 of the CD, is “No Way Home”. I simply love this song. It has a real bluesy feel to it with a real contagious guitar riff and fits Jordan‘s voice so perfectly. It should have been one of the first tracks on the album, listeners should not have to wait through most of the CD to hear this pearl of a song.

S.U.N. is not a one trick pony type of band on their debut CD — there is a little bit of everything here. There is one instrumental, “The Beginning Of The End”, which really sounds like an Eddie Van Halen composition along with some slower rockers such as “Razed”, some groove oriented tracks such as “I’m The One”, an acoustic song that finally kicks about halfway into a harder song with “Something Unto Nothing”, and two forgettable ballads, “If I Was You” and “Wide Ocean”. It’s best to skip those two ballads, especially the latter one.

I am not sure exactly why, but after one or two listens to Something Unto Nothing (and although I enjoy it), I am ready to listen to another CD — perhaps it is the “raw” sound of the album. Did S.U.N.‘s debut CD meet my lofty expectations? The short answer is “no”, however it is still a solid album and a good overall debut from a band that I look forward to hearing more from in the future.