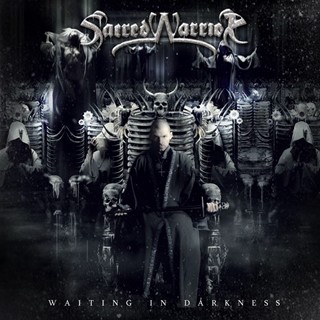 Review:
For the longest time, the only Christian hard rock/metal band I knew of was Stryper. I know that other Christian metal bands likely existed but I never seemed to hear about them. When I went to see Stryper live this summer (who put on one fantastic show) I ran into some people that would not normally attend other hard rock and metal bands’ concerts. One of those people confirmed what I suspected, that there were tons of other Christian metal bands out there — I had simply never heard of them. One of the first bands to be mentioned by my newfound friend was Sacred Warrior. It took a little while for me to listen to the Chicago band’s music, but upon hearing the title track to their new CD Waiting In Darkness, I purchased the album immediately.

Sacred Warrior describe themselves as a “Christian band that plays melodic, progressive hard rock/metal, often quite reminiscent of Queensryche and Iron Maiden‘. Frankly, it felt like I was hearing a lost album from early Queensryche upon hearing a good portion of Waiting In Darkness. Sacred Warrior newcomer and lead vocalist Eli Prinsen sounds just like Geoff Tate did when he sang on the classic era Queensryche albums. In fact, if someone would have played me Waiting In Darkness without letting me know who was the artist behind it, I would have told them that I did not realize that Tate had reformed with his old bandmates and that the band had finally recaptured their vintage sound. I do not really hear the Iron Maiden references that much on Waiting In Darkness, so perhaps Sacred Warrior‘s sound on their prior releases was comparable to them.

Upon checking out Sacred Warrior‘s website, I found out that the band’s path is similar to a lot of other metal groups from the late ’80s and early ’90s. The band released four albums between 1988 and 1991 before breaking up in 1994, only to reform in 2000. Most notably, Waiting In Darkness is Sacred Warrior‘s first studio release in 22 years.

Waiting In Darkness kicks off with “Desperately Wicked”, which showcases the heaviness of the band — along with Prinsen‘s wails, all the instruments are seemingly going all at the same time — sometimes rather than complementing each other. While it is not a bad song, there are many better tracks on the CD starting with “Waiting In Darkness”. Every time I hear the title track, I like it even more — it has that epic feel to it reminiscent of Masterplan‘s first two releases. This is one CD that needs to be listened to quite a few times to appreciate all of its nuances — some songs work better than others. One song that sounds fantastic and really reminds me of early Queensryche is “In Dust And Ashes”, which is slower paced than the first three tracks on the album — and I would swear that I am hearing Tate singing it. Other standout tracks include the heavy “Fear Me” and the stellar “Living In Sacrifice” — the latter which saves the CD after the rather dull ballad “Jealous Love”. The album closes with two remakes of Sacred Warrior‘s earlier songs — “Day Of The Lord”, which originates from the debut Rebellion, and “Temples Of Fire”, which comes from their fourth effort Obsessions. The last song is quite good and has a real ’80s feel to it, and together the reworkings have peaked my curiosity to discover Sacred Warrior‘s back catalog.

Interestingly, while each song is definitely about God, I sometimes can hardly make out what words that frontman Prinsen is singing and/or wailing. Accordingly, the positive and important message that the band wants to convey is there but may be hard to understand unless you pay some attention to the lyrics in the CD booklet. Waiting In Darkness sounds like vintage Queensryche, and to a lesser extent Masterplan — in essence, a power-metal band with keyboards — and I am looking forward to discovering and hearing their past releases.