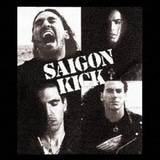 Review:
From the opening of “New World”, one is fully aware that they are listening to a different brand of hair metal. While most people will remember Saigon Kick fully for their hit ballad “Love Is On The Way”, the band’s self-titled debut is the place to start. This is where Saigon Kick started to develop the sound that they became best known for.

While The Lizard is a decent album as well, it relies too heavily on gimmicks, including loopy instrumentals and sentimental ballads to gain sales. This album has none of that and succeeds in just about everything it tries.

Matt Kramer‘s lyrics, which can veer from serious (“Coming Home” and “Down By The Ocean”) to quite silly (“What Do You Do”) help to serve the album in more ways than one. The music is eclectic as hell but again, it’s only more of a drawing point for the band. And let’s not forget the songs, most of which still hold up a whopping eighteen years later; from “My Life” and “Colors” to the closing finale of “I.C.U.” the band were more than capable of some kick-ass material.

The fact that they are only known for a damn power ballad is more than a shame but what can you do now. The band is split into four separate factions, most of the hatred and acrimony pointed at guitarist, keyboardist, vocalist, songwriter and producer Jason Bieler clearly shows that a classic reunion will never happen, so just sit back and enjoy the music!