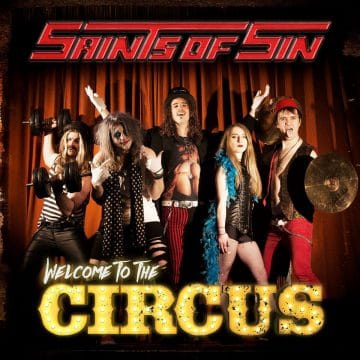 SAINTS OF SIN
WELCOME TO THE CIRCUS
Released on December 1, 2017 (3MS Music)

Review:
Warning: if highly infectious, extremely melodic, guitar driven hard rock is not your bag, than keep reading as Saints Of Sin will convince you with authority otherwise! Hailing from jolly ole’ Christchurch, UK, this five piece of barely legals have put forth a simply glorious 13 track outing that will appeal to even the most finicky of listeners.

If you judge a book by the cover, well, you’ve probably moved on already but don’t let the sleazy Poison-esque glammed up cover fool you. These kids play a version of hard rock that is a European staple but has been lacking on the shores of the US. A hard rock that is so harmonic, polished and so lick filled that after a hundred listens, I am still finding myself saying things like “Wholly crow, did you hear that!” No clowning, listen with both ears as you’ll need them to catch it all!

Saints Of Sin‘s debut entitled Welcome To The Circus is a Stryper meets Bon Jovi gets abducted by Steel Panther kind of affair that has this reviewer smitten. Sure, there are two boatloads of ’80s strip fueled influences on this long play and you will hear nods to the likes of Mötley, Ratt, Whitesnake, XYZ, etc, etc, etc… Each and every number has an equal part insanely hook laden harmonically enhanced vocal, a twin guitar attack that is reminiscent of Sweet and Fox, and a bottom line that will lock up those 12’s” in your back seat. And of course, so many layers that this long play is literally like an onion. Yep, many many layers and Welcome To The Circus will have you shed a tear or ten with sheer joy in what is tickling your ears.

Highlights, and trust me there are NO low lights to be found herein, are certainly the riff filled (and that is filled to the ding dang top), toe tapper “Going Down.” The play through video is dumbfoundingly amazing with what must be a hundred riffs per minute and the trade offs between Sparxx and Sophie that I am still trying to wrap my head around. Killer indeed. This one has a “Calling On You” solo section that again would make any Stryper fan giddy. “Wasted Nights” is another arena rocker that would have 30,000 plus standing on their seats and borderline rioting in the aisles to get a hand on the band. Huge vocals, harmonies and every other element just perfectly placed performed. This one again has a Halenesque riff and a nice smattering of double bass and cowbell that Tommy Lee would say ‘Hell yeah” to. “21 Shots” is another of the noteworthy for fans of Tora Tora, Tesla and those of the technically enhanced, slightly southern fried hard rockers. “One Last Time” as is “One More Minute” are both catchy as all get out cigarette lighter arena rocker with mega anthemic choruses, and solo after solo of epic proportions. The breakdown in “The Devil You Know” is worth the album cost alone! Man, that acoustic work and the vocal shouts are kick butt.

Saints Of Sin, as you may see, are a very talented group. The musicianship is well beyond the group’s years. The timing, writing and musical sensibilities are certainly something you would expect from far more seasoned groups three times their age, but it’s not a negative sentiment — just an observation — and we should be grateful these guys and gal shred and slay for us in the ilk we love. I am grateful that a debut can pack such an impactful wallop and enamored with what has been created and shared with us. I, for many, am highly anticipating and watching the band’s every move to see what’s next. Well done Saints Of Sin! Well done!

Saints Of Sin’s first single and music video from their debut album, ‘Welcome To The Circus’ in association with 3Ms music. Buy the full album here: http://3msmusic.com/product/saints-of-sin-welcome-to-the-circus/ Filmed and edited by Richard Allen at The Smokehouse studio in London. Audio mixed and engineered by James Patrick and mastered by Gwyn Mathias.