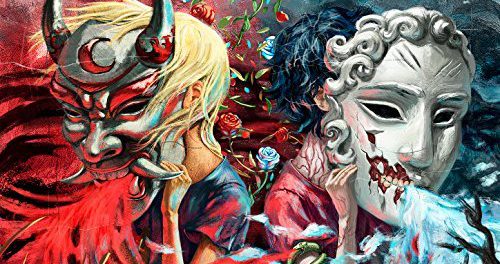 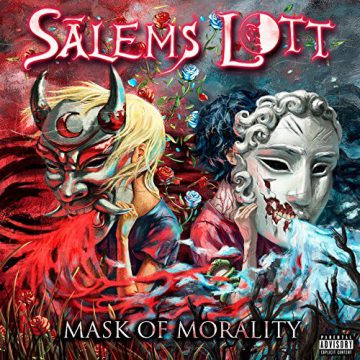 Review:
With the latest release from Salems Lott, it seems the band has really stepped up its game. I can attest to this fact, that from the very first song, you know they mean business. With the band’s first album, I felt that the songs themselves were a little scattered and not cohesive, but with Masks Of Morality, Salems Lott rectify that matter. All the songs just have a good solid feel from start to finish and match thematically and in sound as well. They must have had a band meeting and said “Okay, let’s hone our attack to be more impactful.”

When listening to this, think of a combo of Yngwie Malmsteen style songs with its guitar frenetics and the mild classical sounding moments. Lead vocalist Monroe Black even sounds more power metal like in a gruffer way. Next, think of Creatures Of The Night era KISS, with the more heavy rock elements and the bigger choruses giving them that more stadium rock feel in the music. Speaking of KISS, don’t be afraid of the band’s image because these guys mean business. I am not sure how many readers are familiar with the genre Visual Kei from Japan but I think the band members draw heavily from this genre, in how they look and much of the band’s graphical presentation, videos etc.

The production has taken a step up also and is really good and seems to be done by the band members themselves. I made mention of the sound, because right at the beginning, the first song “Gestapo Enigma” is just “Bam!” and hits you with the pummeling drums of Tony F. Corpse. His drum sound is very up front in the mix. I love the double bass drums used here to accentuate the song. “When Heaven Comes Down” brings to mind the KISS comparisons, with some Gene Simmons vocals styles. Although a tad bit low in the mix, you can still hear bassist Kay Kaos with his own technique and sound, adding dimension to the songs with his own fretboard wizardry. Speaking of wizardry, mention has to be made of guitarist Jett Black and also lead vocalist/guitarist Monroe Black. There is plenty of guitar styling between both. There are a few songs where they are doing dual lead trade-offs. You will hear those Malmsteen moments but also I get a slight feel of the band Ana Black (late 80’s Canada — great band by the way) from the Sunset Strip glam heydays where their guitarists had great technique. Here, Jett gives that call back to me in sound. They even have a slightly similar look.

It’s hard to talk about standout tracks. The songs are all great and have those flavors and nuances of different genres but meld them together so well, be it with the guitars or the drumming and just with the superb musicianship overall. I love the stomp of “Mother Of Chains.” I was intrigued with the full-on auditory assaults of “Gestapo Enigma” and “Alexandria’s Genesis.” The album seems to be a minor concept album of sorts (apologies to the band if I am wrong) with the CD divided into two parts, Mask I and Mask II. Even the band imagery/photos in the CD inlay show a different look to accompany/convey the message and style for the lyrical concept.

I definitely feel the band has avoided the sophomore jinx (if that really is a thing). Salems Lott have gathered all the components of a well-made album, in sound, visuals, and all that’s in between. Give it a go. If they come to my neck of the woods, I am definitely going to check them out live. I’ve heard stories of the past show/experiences and I want to see if they give it their all there as well.