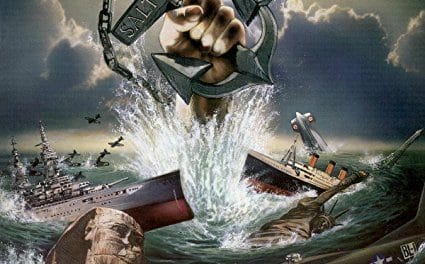 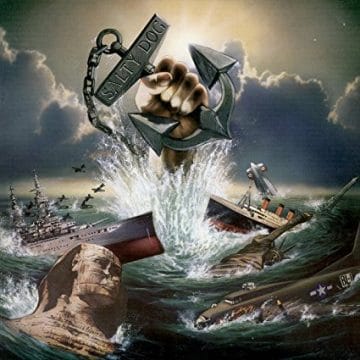 Review by Ruben Mosqueda in December 2016:
Salty Dog are one of the most criminally underrated rock acts from the late ’80s / early ’90s. Along with their contemporaries The Scream, Salty Dog should have been huge. Much like the The Scream’s Let It Scream, Salty Dog’s 1990 effort Every Dog Has Its Day was a victim of ‘oversaturation’ of the glam rock scene, ‘label neglect’ and ultimately the changing of the guard in the rock world. Every Dog Has Its Day was produced by Peter Collins better known for his work with Rush and Queensrÿche. The end result is a bombastic hard rock masterpiece. Every Dog Has Its Day features standouts “Come Along,” “Ring My Bell,” “Where The Sun Don’t Shine,” “Cat’s Got Nine” and the Willie Dixon classic “Spoonful.”

Salty Dog wore their influences on their sleeve. Sonically, you’ll find the usual suspects; Aerosmith, AC/DC and Led Zeppelin in their music. Every Dog Has Its Day is chockful of bluesy licks, blistering solos, powerful, dynamic vocals, outstanding bottom end and features a drum sound that is second only to the sound that Bob Rock got for Mötley Crüe on their self-titled album.

Rock Candy Records has rolled out a deluxe or ‘reloaded’ version of Every Dog Has Its Day, which has been remastered and includes the expanded liners that we have grown to love with each Rock Candy Records reissue. In addition to the standard release, there’s the inclusion of demos of album cuts; “Come Along,” “Ring My Bell,” “Keep Me Down,” and the unreleased “The Bucket Song.” How’s that for a bonus? If you tune into Sirius’ [satellite radio] Hair Nation [channel] these days, you can still hear Salty Dog’s “Come Along” in regular rotation just like you did on Z -Rock back in the day, which is a tribute to just how incredible this band really was.

Review by Skid in June 2010:
Once in a blue moon, an unknown band is able to harness perfection, even if for just a short amount of time. Cult legends Salty Dog are one of those bands — a group that was able to latch onto a shooting star and go for a quick ride before crashing and burning. The year was 1990, when hair metal ruled the charts, and Salty Dog came from nowhere to release one of the genre’s true gems. Twenty years later that album, Every Dog Has Its Day, has been re-issued and brings back a flood of great memories.

“Come Along” was Salty Dog‘s introduction to the record buying public and still goes down as their crowning achievement — you could even go so far as to say this song remains sleaze metal’s pinnacle. I use the term ‘song’ loosely however as this number doesn’t follow the typical formula, devoid of any real chorus or structure. It begins with a memorable bass pattern before being joined by a drum beat that would make John Bonham roll over in his grave with envy. The guitar riffs descend in and out with no real pattern before the voice kicks in with the infamous ‘sweet little baby, she’s my hotdog bun’ line. The whole track swings along before exploding towards the finish… “Come Along” truly was, and still is, a work of pure genius.

The rest of Every Dog Has Its Day pales in comparison, not because the album is a letdown, but simply because “Come Along” is so damn perfect. “Cat’s Got Nine”, “Ring Me Bell”, “Where The Sun Don’t Shine”, “Heave Hard (She Comes Easy)”, “Slow Daze” and “Nothin’ But A Dream” are all legendary in their own right, and could easily have been the standout cuts on a lesser band’s release. Jimmi Bleacher possessed a voice that could strip the paint from your living room walls while the rhythm section of Michael Hannon and Khurt Maier worked off each other with pinpoint precision. Guitarist Pete Reeven kind of did things his own way, which made everything that much more interesting.

The 2010 Bad Reputation reissue of Every Dog Has Its Day not only contains the original flawless offering but an extra four demo tracks that show how the band evolved once they were harnessed within the studio. The sound quality on these four bonus cuts, including the previously unreleased “The Bucket Song”, isn’t very impressive, but the young musicians making the music surely were.

We all know and remember the groups that achieved massive success in the early ’90s, but it is often the forgotten warriors such as Salty Dog that really made that time in history so incredible. Of course, and thus adding to their legacy, Salty Dog self-destructed in part due to drug abuse and in-fighting. It was a tragic end to an outfit that showed so much potential as their music still hits hard after all these years. If you missed Salty Dog back in the day, that’s understandable, but if you let this album slip past you again, you’re a ‘lonesome fool’!