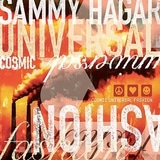 Review:
Sammy Hagar has always been hard rock’s jester for all seasons, releasing albums and playing live shows that were like one big party (complete with his signature Cabo Wabo tequila). Sadly that is what makes the Red Rocker’s newest CD such a letdown, it just doesn’t party hard enough, and is actually a complete downer in places.

Despite a star-studded line-up of guest musicians that includes members of Journey, Guns N’ Roses, ZZ Top and The Cult I can only find two (yes two!) songs that are absolutely top-notch. By far the best song on Cosmic Universal Fashion is “Loud”, oddly enough a song that wasn’t even written by Sammy Hagar. Instead the tune was written by John Eddie exclusively for Hagar and yet it captures the classic spirit of Sammy‘s party-rock better than any other track on the CD. It is the type of hard rock number that is memorable, fun and classy all rolled into one. The other worthwhile song on this CD is “I’m On A Roll” which was written for NASCAR racing and has a guitar riff that perfectly captures the feel of a car speeding down the track.

Unfortunately for Sammy Hagar and listeners, the rest of Cosmic Universal Fashion is nowhere near as good as the two songs I mentioned. “Psycho Vertigo” and “Peephole” are left-overs from the old Planet Us sessions, a superstar band that folded when Sammy reunited with the Van Halen brothers. As Hagar himself states in the liner notes (I’ll come back to them later) he was angry at the time he was working on these songs, and it shows. They aren’t bad rock tracks, and guitarist Neal Schon does some admirable work, but they are the polar opposite of good-time rock. Another disappointment is the cover of the Beastie Boys‘ anthem “Fight For Your Right To Party”. I expected this to be the perfect cover choice for Sammy, but his voice sounds terribly strained on it even though he sings fine on every other track.

I’m not a fan of funk-infused rock music, and therefore both “Switch Off The Light” and “24365” don’t interest me very much. “When The Sun Don’t Shine” isn’t bad for a ‘drinking margaritas with your toes in the sand’ type song, and might come across good in a live setting, but it is far from a rock song. The album ends with an extended live version of Van Halen‘s “Dreams” which actually ends this sub-par disc on a relatively high note.

I know Sammy Hagar likes his tequila, but maybe he is drinking too much of it these days. I can understand the darkness in the Planet Us songs, but where is the fun in the rest of the CD? Sammy has built a career on being fun, and this album just doesn’t deliver much of that. Another thing that I didn’t like was the CD packaging itself. It is labeled as being ‘environmentally friendly’, which in other words means no booklet. In this day and age of poor CD sales I think the artist should give the consumer every little bit they can, and in my opinion having to download the liner notes and print them out on my crappy Lexmark isn’t giving the fan much motivation to buy the actual product. I don’t know if that was Sammy‘s idea or the record label’s but I hope it doesn’t become a trend.