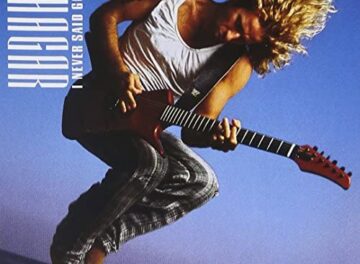 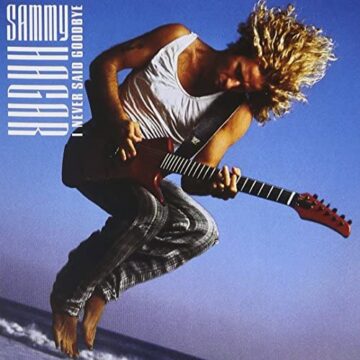 Review:
When Sammy Hagar‘s album I Never Said Goodbye was released, I was already a big fan of the Red Rocker. By this time, I was deeply into the Hagar catalog, with him being the reason I started digging into the Van Halen albums, starting with 5150 and then going back into the band’s work. With that, I also was buying the discounted Capitol releases on cassette that were compilations of Hagar‘s solo career. There wasn’t a day that went by that I wasn’t playing some Hagar or Van Halen, along with my brother and his older friends. No matter if we were playing role-playing games or having camp outs in Columbiana Ohio, there was always Hagar playing in the background. We all had the original pressing of the cassette, which was simply called “Sammy Hagar” until it was renamed after an MTV contest was held promoting the album.

When this release came out, I was already a fan of “Give To Live,” which was being played on MTV. But listening to it now, does it still sound as good as I remember it? Starting with “When The Hammer Falls,” the album starts off mid-tempo, but still carries the signature Hagar high note screams throughout the song, even ending with it. The strong bass by Eddie Van Halen and powerful drums by David Lauser makes this a solid opening track. With Hagar still in Van Halen (the album was made as a contractual obligation to be able to join the group), this album was full of excitement for me. I was wondering how Eddie would sound being a bass player and not just the expert keyboard and guitar God he was at the time. He adds nice grooves throughout the songs, which are heard here.

“Hands And Knees” has a darker feel to it with its creeping rhythm to it. The guitar and bass work is what makes the song for me, but was a song that I used to skip when I first purchased the song.  Although musically appealing, this still isn’t as great as some of the other deep cuts. “Give To Live” was all over MTV when released as a single, with its music video. Starting with some humor in the video, where a girl is sitting on a sofa telling her boyfriend that she’s not a Hagar fan, hoping for not another “Sammy Hagar car song,” the song brought in a new audience, especially the female listeners who like the ballad format. The positive lyrics, and Hagar‘s vocals on the album, provides a nice listen and proved his artistic talents, where he just wasn’t a rocker with screaming vocals. This was a song Hagar played live as part of his portion of the live show with Van Halen, in which every member did a solo. Even stripped down, the song is a well-written piece with deep spiritual lyrics.

“Boys Night Out” was the theme song for my brother and his pals after the album was released. The song was a lifestyle for them, and it was like Hagar wrote it just for my circle of friends, except for the parts about fighting and being in jail. This is a Saturday night party song made just for the males, and one of the reasons why Side One of this cassette was played constantly in our group. The radio-friendly format (it wasn’t pop but not total hard rock and heavy), along with the backing vocals, made this one of my favorites on the album. Following this was “Returning Home,” another song that was in rotation with the friends my brother and I socialized with. Taking a different approach, starting the song with just vocals and then kicking in with the chugging rhythm, separates it from the others on Side One. This shows the songwriting talents of Sammy, where he just didn’t write about parties and cars, which translated to the several follow-up Van Halen albums. The drums drop out during the chorus and give the keyboards a spotlight. A great ender for the first side, and takes me back to the memories with those guys at gatherings.

“Standing At The Same Old Crossroads” and “Privacy” takes the second part of the record into a blues vibe, with the first part a jam session, and then an R&B/boogie groove, much like Golden Earring‘s “Radar Love.” “Privacy” is a song that I originally didn’t listen to much when I first got the cassette, but have more respect for it listening to it now, thanks to my respect for deeper cuts on albums. I used to only listen to the singles on many albums, but as I grow older, I now appreciate the deeper unreleased songs thanks to radio shows like Patrick Hemming‘s “Deep Dives” featured on Daily Boom Internet Radio each week. The beginning of “Back Into You” has an AC/DC format, with the broken, choppy guitars and solid drums at the beginning of the song before the keyboards and strong backing vocals turn it into a format similar to the band Foreigner as well.

Another song Hagar took from the album for his solo section with Van Halen live is “Eagles Fly.” When I saw the band on the Balance tour, Hagar dedicated the song to the recently passed Jerry Garcia. This is another song with positive lyrics, and there is a poetic format with the song. Regardless of how the listener interprets a song, for me, it has a positive outlook of escaping from daily problems and struggles to encourage a time out for relaxing peacefully.  The music builds throughout, which is something that I feel lacks in most songwriting in today’s music, being dynamics in structure. This song was rumored to be brought during the 5150 sessions but was rejected by the band.

The closing “What They Gonna Say Now” has the Hagar format that wasn’t too far off from his last solo album, VOA. The bass drives the song and has rhythm changes where it is not straight beats all the way through. This song appealed to the classic Hagar sound, as opposed to those fans who may have jumped into the album due to the singles and got more mainstream play, thanks to MTV.

The album has more memorable moments for me, due to the times hanging out with my brother’s friends and being a huge Van Halen/Hagar fan at the time. After not listening to it for years, there are great songs on here that still hold up, and is an underrated album that may not get mentioned as much when naming Hagar‘s great albums. This is not as solid overall in terms of a song for song quality as “VOA” or “Standing Hampton,” but it isn’t a total miss either. I still remember playing Side One the most in my youth, and will still say that side is the best of the two. No matter what the album title is known as, this is still a release that fits well with Hagar‘s artistic work,  being a record from the 80’s that many should check out if they haven’t already.

Sammy Hagar‘s “Give To Live” video: