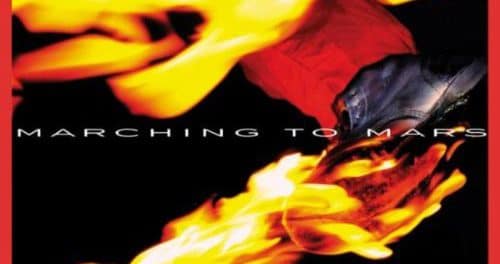 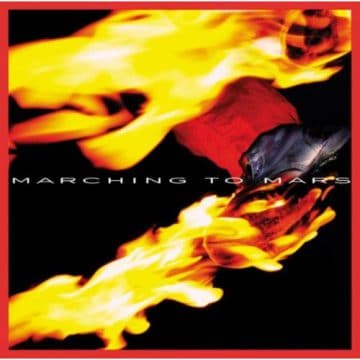 SAMMY HAGAR
MARCHING TO MARS
Released on May 20, 1997 (MCA Records)

Review:
One of the most interesting releases of 1997 was Sammy Hagar‘s first post-Van Halen release, Marching To Mars. Having “discovered” Van Halen when their single “Jump” was released and reached number one on the charts, I had always been more partial to David Lee Roth than the Red Rocker but at the same time, also really liked Hagar‘s first two Van Halen albums — 5150 and OU812. The next two Van Halen albums were kind of shaky for Hagar with For Unlawful Carnal Knowledge (which was salvaged by the blockbuster track “Right Now”) and Balance (which was better overall than F.U.C.K. but without a killer song) simply not having the melodies (with the exception of “Right Now”) that Van Halen had been able to come up with in the past.

Given that I was not a big Sammy fan, my initial plan back ion the day was to ignore Hagar‘s solo album Marching To Mars but upon hearing the first single “Little White Lie”, I quickly changed my mind and bought the album. Boy, am I glad I did because Hagar certainly proved on Marching To Mars that he was more than fine musically speaking without Eddie, Alex and Michael. And when you compare Marching To Mars to Van Halen‘s first post-Hagar studio album — Van Halen III — the case becomes even stronger for Hagar that it would take about ten plus years for the Van Halen brothers to recover from losing Sammy.

Interestingly enough and although I have owned Marching To Mars for almost 20 years, I did not know that Hagar had enlisted a bunch of guest musicians including Slash, singer Eric Martin and his old Montrose bandmate Denny Carmassi who handled most of the drumming. Hagar even had a full on Montrose reunion for the song “Leaving The Warmth Of The Womb.” I’ve got to give credit to Hagar and his production team because to me, Marching To Mars always seemed like one consistent listen with no evidence that the musicians behind each song were rotating like crazy! I always thought that Hagar was a little bit out there after leaving Van Halen with his whole Marching To Mars theme for his first post-Van Halen solo album and his flashy accompanying orange jump suit.

But let’s get to Marching To Mars. The album kicks off with one of Hagar‘s best tracks hands down — “Little White Lie.” It’s too bad that Hagar didn’t bring that tune to Van Halen because it would most likely still be in the group’s setlist whenever Hagar handles the lead vocals. I just know that the oft-Hagar promoted Van Halen reunion with Roth and Hagar taking turns singing the Van Halen classics will take place one day. “Salvation On Sand Hill” is a cool moody rocker that builds and builds to a fever pitch before slowing back down. I’ve never been a fan of ballads unless they are really good and “Who Has The Right?” is one of those great ballads. Had Hagar brought that song when he was in Van Halen, the band would have had a hit on its hand. Instead, the song got buried on Marching To Mars, which had to be considered a commercial flop or disappointment for Hagar after reaching at least triple platinum sales for each Van Halen studio album that he was a part of.

“Would You Do It For Free?” is a bit of funky bluesy number and has always been a track that I really like. The background vocals and funky James Brown feel to the song are a nice touch. The Montrose reunion doesn’t disappoint with the heavy at times, slowed down at times “Leaving The Warmth Of The Womb.” The song rocks at times, is so expertly slowed to a pulp at times before starting back up again. It makes you wonder why Hagar, guitarist Ronnie Montrose, Carmassi and bassist Bill Church couldn’t get it together to play as an unit more often. One track that I have always been able to do without is the sappy ballad “Kama.” It’s not a bad track but definitely on the dull and predictable side. It’s a skipper! Too bad that Hagar ended up releasing a video for that song because it’s probably the weakest track on Marching To Mars. After “Kama” is when Marching To Mars starts to get really interesting with “The Other Side” which reminds me of the odd like number that you would invariably always seem to find on those early Roth led Van Halen albums. I love everything about “The Other Side” from its slow bluesy start to when it finally kicks into overdrive.

“Both Sides Now” has hit written all over it and would have likely been a chart topper had this been a Hagar led Van Halen tune. It’s always bewildering to me how the wrong musical vessel (in this case, Sammy being a solo act rather than in Van Halen) can lead to a great song simply not getting its just due. “The Yogi’s So High “I’m Stoned)” might start off a little slow but it has an engaging chorus with lost of melody to it. “Amnesty Is Granted” slows the pace again but is way better than “Kama” because it doesn’t feel like Hagar is trying to score that big hit single with the former. The title track and album closer again sees Hagar throwing a wrench with a bit of an oddity which I find works quite well to close the album. Overall, Marching To Mars is one of my favorite albums with Hagar on lead vocals and that includes his Van Halen output. All I know is that the chances of my playing Marching To Mars over F.U.C.K. or Balance are way way higher and I am never disappointed when I put on Marching to Mars for a spin.