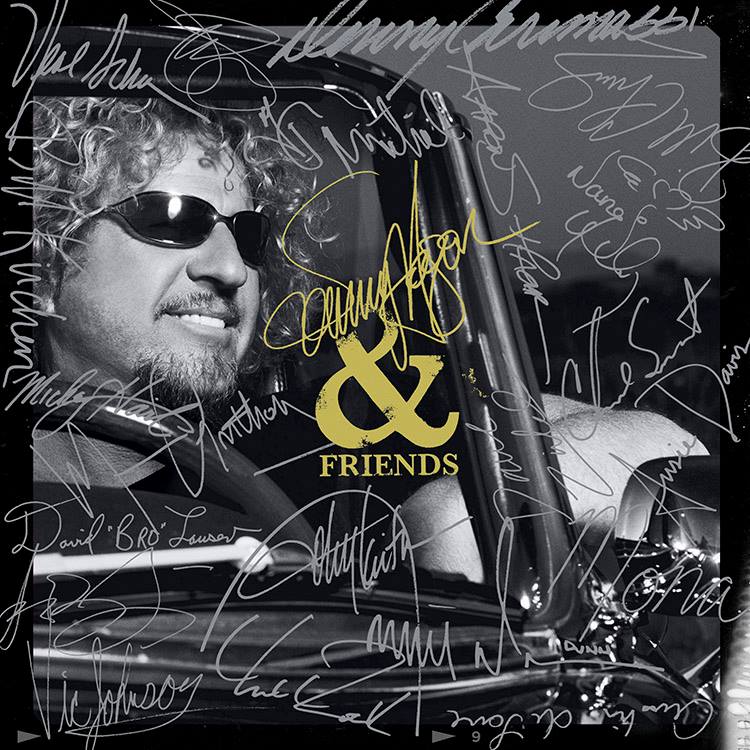 Review:
I was excited to hear the rest of Sammy Hagar‘s newest CD Sammy Hagar & Friends after getting a preview of two of the songs — “Knockdown Dragout” and “Bad On Fords And Chevrolets” — at his late August show in Toronto. Given the very long list of guests appearing on this album — including Hagar‘s Chickenfoot bandmates, Heart‘s Nancy Wilson, and Kid Rock — my expectations were high.

For the first time in my life, I received a free copy of the concert performer’s new CD with my overpriced $80 concert ticket for Hagar‘s show. I was a bit disappointed when I found out that this free copy came in the form of a download given that I have always liked to own physical copies of albums. After downloading the album I was very disappointed when I heard the rest of the songs on Sammy Hagar & Friends. I remembered that Hagar had warned that there were all sorts of musical styles on his new CD, so I was keeping an open mind. However, nothing could prepare me for most of the crap here.

With the majority of the new songs ranging from country to blues, I disliked most of them aside from, likely the only, hard rock tracks, “Knockdown Dragout” and “Bad On Fords And Chevrolets”, the CD opener “Winding Down”, and the live rendition of the Montrose classic “Space Station No. 5” with Joe Satriani. Even the latter song starts falling a bit short towards the middle.

Sammy Hagar & Friends starts off with a bluesy number called “Winding Down” highlighted by Hagar‘s vocals and what sounds like some slide guitar. I actually like the song — its obviously not what I usually listen to, but it is pretty catchy and reminds me of what you might have found on those earlier Van Halen albums with David Lee Roth at the helm. “Not Going Down” is another story altogether — it also has that bluesy feel but the guitar sounds all muddled making it quite unenjoyable. I also didn’t enjoy the small choir of presumably women singing the chorus “Not Going Down”. You would think that the CD would start kicking into overdrive by now but there are two more slower disappointing songs, “Personal Jesus” and “Father Sun”. Both songs are definitely better than “Not Going Down” — which is not hard to beat — and have some good portions followed by questionable and dull moments. Next up is probably the best song of the new album, “Knockdown Dragout”, an up-tempo anthem that will likely be a staple of Hagar‘s live shows for years to come.

Hagar‘s cover of the Bob Seger classic “Ramblin’ Gamblin’ Man” is alright but does not come close to measuring up to the original. That being said, I place it in the top half of the songs on Sammy Hagar & Friends, which is sort of sad when you think about it. Probably one of the worst songs on the album has to be Hagar‘s slowed down cover of Jimmy Buffett‘s “Margaritaville”. I have never been a big fan of this song and Hagar does not improve upon it in any way. This is the type of song that you might hear while at some run down little bar near a seaside resort in some tropical paradise. If that is what Hagar was hoping to achieve with the cover, he definitely succeeded — however, as long as I’m not drunk and chilling at a run-down bar in the tropics, I do not want to hear this song. “All I Need Is An Island” follows in the same vein — if I was into country music and in the mood for some slow mellow tunes, I might have enjoyed this one.

Sammy Hagar & Friends closes with two decent songs, “Going Down” — with the all-star cast of Neal Schon, Michael Anthony and Chad Smith as the backing band — and a live rendition of “Space Station #5”.

To put things into perspective on how far afield Hagar has strayed with more than half of the tracks on his new CD, two people walked into my office at different times while I was listening to it. The first person advised upon listening to snippets of the CD that he liked country music too! Wait a minute, I don’t listen to country music! The second person, who does not like hard rock or metal music, heard “Margaritaville” and commented how Jimmy Buffett played a better and faster version of the song.

Sammy Hagar should stick to Chickenfoot type tunes with Satriani, Anthony and Smith for any new material to be released in the twilight period of his musical career. Sammy Hagar & Friends is one CD that I will likely not be playing again anytime soon.