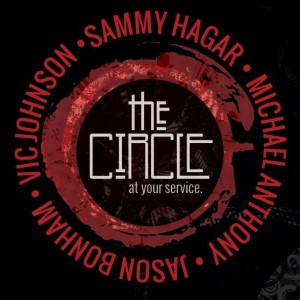 SAMMY HAGAR & THE CIRCLE
LIVE: AT YOUR SERVICE
Released on May 19, 2015 (Mailboat Records)

Review:
Finally! Sammy Hagar is back with a record that rocks. After two very disappointing records which I will dub “experimental” for the Red Rocker, namely 2013’s musically all over the place Sammy Hagar & Friends and 2014’s acoustic stinker Lite Roast, Hagar is back with what has to be considered an all-star cast dubbed The Circle. This all-star cast consists of now long-time cohort bassist Michael Anthony who needs absolutely no introduction, drummer Jason Bonham son of the legendary Led Zeppelin drummer John Bonham, and to a lesser extent Waboritas guitarist Vic Johnson.

Sammy Hagar & The Circle‘s Live: At Your Service is supposed to showcase songs throughout Hagar‘s career but just like when Hagar did his “Four Decades Of Rock” tour a couple of years ago, Chickenfoot material was snubbed in its entirety at least for this new live album. Hagar‘s new record should really be touted as a cross between “Van Hagar” and covers of Led Zeppelin songs — or “Red Zeppelin” as Jason Bonham announces at one point on the live record — because out of the nineteen tracks on Live: At Your Service, seven emanate from Hagar‘s time in Van Halen and five are covers of Led Zeppelin classics. The latter should not be a surprise with Jason Bonham in the fold but I would have liked to hear some Chickenfoot songs such as “Oh Yeah” or “Big Foot”. This is especially so since half of the Chickenfoot line-up — Hagar and Anthony — are playing on this record. Perhaps the Chickenfoot guys have some sort of deal in place that they cannot play Chickenfoot songs outside of the band or something as I find it perplexing why at least one or two Chickenfoot tracks are not included in Hagar‘s live sets.

That being said, there is really nothing to complain about with the songs that did make it onto Live: At Your Service. Sammy Hagar & The Circle play all of the Van Halen or should I say “Van Hagar” tracks that Hagar is known for including “Right Now”, “Why Can’t This Be Love” and “Dreams” along with some “deeper” cuts such as “Finish What Ya Started” and “Best Of Both Worlds”. Let’s face it. The odds of hearing those songs live with anyone other than Hagar and Anthony are slim to none at this point. Hagar also does a decent job of singing the various Led Zeppelin tracks covered by The Circle including “Good Times Bad Times”, “When The Levee Breaks” and “Rock And Roll”. He is no Robert Plant by any means but he sings the Zeppelin tracks good enough to make them worth listening to. You also have some choice cuts from Hagar‘s solo career including three of my favorites “I Can’t Drive 55”, “There’s Only One Way To Rock” and “Little White Lies”.

The one thing that annoys me about Live: At Your Service — after the omission of any Chickenfoot material — is that there are not one, not two, but three solos! I get it that the band members all might want to get a little showcase given their “star” status but including Anthony‘s dull bass solo, Bonham‘s drum solo and Johnson‘s rather short guitar solo (less than a minute and a half) over three additional songs is disappointing indeed! Overall, Sammy Hagar & The Circle prove on Live: At Your Service that they are an exciting live outfit that is definitely worth the price of admission.