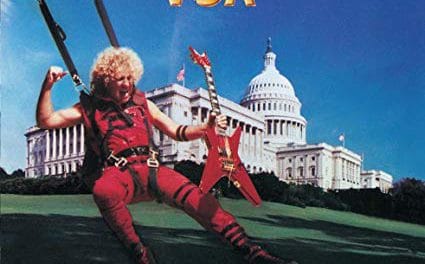 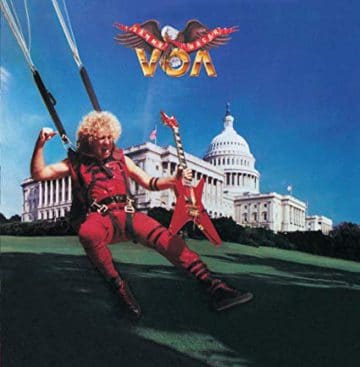 Review:
My first experience with Sammy Hagar’s VOA album was in junior high waiting for the bus to pick me up for school. The bus stop was right in front of the high school in my hometown of Columbiana, Ohio. My friends and I would be in awe as we saw the high school kids blast rock music from the cars sitting in the parking lot around 7 a.m. before the start of classes. We heard bands like Queen, Ratt, and other hard rock albums, and could not wait until we got to high school, so we could do the same.

As some may know from my previous reviews, and on my online page, that I was a fan of Van Halen once Sammy joined the band, going out and getting the Van Halen back catalog, as well as the cassettes of Hagar’s solo work (especially the Capitol re-releases on cassette), after a friend of ours had every cassette. The first concert I ever saw was Van Halen in 1991.

Regardless of where people stand on the better Van Halen singer, Hagar’s VOA is a classic album. The cover of the release, with Hagar parachuting onto the Washington, D.C. yard in front of the White House, is one of the cooler covers in rock music. But does the album hold up after all these years?

There’s not much to say about the first track, Hagar’s most famous song, “I Can’t Drive 55,” that hasn’t been said before. The song has appeared in many movies, video games, and is a staple for car lovers. The fact that Hagar was writing the lyrics to the song, while he was getting written up for a speeding ticket, is a classic story alone. From napkins at restaurants, to waking up in the middle of the night writing songs, musicians find their inspirations in many ways. This is one of those great tales. The song is a catchy sing along song that demands to be cranked up when it’s heard, while driving down the highway. The song is still a classic song that does not sound outdated, no matter how many times it gets played. Overplayed at times? Yes, but there’s a reason for it; it’s a wonderful song that’s still loved by many.

“Swept Away,” brings a mystical, mid-tempo feel at first, but then cranks out during the choruses. The lyrics about the beach (which became a common theme for Hagar after this album in both his Van Halen and solo work), gives the dream-like feel that is complimented by the drumming of David Lauser. His fills throughout the song is fun to listen to, as a drummer myself.

“Rock Is In My Blood, “ is a keyboard heavy song, where Jesse Harms can be heard more than on the first two tracks. The song is a tribute to the love of music, especially hard rock, but with a different style to it. Many songs that celebrate rock usually incorporates a faster tempo, but not here, and does it without compromising the quality of the song and theme. The placing of the songs on this record (which sometimes is a complaint to me on releases) is wonderful throughout VOA. The song just stops at the end, without a repeating fade out of the chorus which is appealing for the song.

“Two Sides of Love” is one of my favorite all time Hagar songs. When I think of the album, I think of two songs immediately (and one isn’t “I Can’t Drive 55”). This is one of the songs I always think of when this release is discussed. This song was always being blared from the cars when I was waiting on the bus, which brings back good memories. I like the song because it has a pop , radio-friendly style to it. When I was first discovering Hagar’s music for the first time, I was still listening to the Top 40 hits at the time, and not harder music, so this was a great introduction for me to his work. The guitar solo appeals to the hard rockers and not just popular radio listeners like me. Some may forget that Sammy’s earlier songs, like “Plain Jane” and “I’ve Done Everything For You” (a hit for another one of my favorites in the 1980s growing up, Rick Springfield) had a radio friendly pop sound. Sammy just didn’t write great hard rock songs, and this song proves his songwriting skills in several genres. Interesting enough, the other song that I think of when someone mentions this song, comes in right after. “Dick In The Dirt” has a humorous style to the lyrics, although the solo is heavy along with the driving of the guitars on the song. This was a song that was constantly played by the older kids when we were waiting for the bus. I just liked this song and the chorus, which we would sing along to, even in my college years when I worked at a grocery store.

Track six, the title song, starts off with drum fills that reminds me of Zeppelin’s “Rock And Roll.” Please don’t misinterpret that I am stating that VOA holds up to the Zeppelin song, but it is similar to me with the opening, and with Sammy publically stating his influence by the band. It may not have been unintentional. VOA, an acronym for “Voice of America,” shows how album covers back in the day helped connect to a song on the album (usually the title track). Hagar has stated in interviews that it was inspired by the U.S.S.R pulling out of the 1984 Olympics, and other world events. It is not an overtly political song that could offend people, as opposed to some of the political statements made in today’s music.

Good music can be interpreted in different ways to the listener if done artistically, instead of being extremely blunt that it offends those that do not agree with the writer’s intended viewpoint. Just look at some of today’s acts who have alienated some of their fan base by getting overtly political in a world where everyone’s easily offended. I’m not going on a political rant, but certain songwriters can write about world events and make a cool song that doesn’t tick off listeners that may not agree with the opinions. Hagar succeeds with this track. The music video is an action packed show, with spies and a story that would be on the show The A-Team or in  a James Bond movie, which brings back the days when music videos were just plain entertaining. Regardless of whatever political statement Hagar was making (“Pro USA” or just an anthem uniting rockers), the track is a jam fest. It’s another continuation of exciting songs throughout the album.

The placement of “Don’t Make Me Wait” fits after “VOA.” The keyboards are heavy on this song, and even though the lyrics seem a little simple (compared to some of the others on the album), it still works well overall. From relationships, political statements, or just plain celebrating music, the album continues with every track as being a winner. I am not sure if Hagar had leftover songs from the release (or because of Ted Templeman‘s influence), but the songs picked to record here were expertly chosen.

The last track, “Burnin’ Down The City,” may be my least favorite of all the songs on the album, but it still has its finer points to it. The guitar solos are enjoyable to me on the track, and even though I like this song the least, it is not a bad song. I just did not enjoy it as much as the other seven songs (let’s face it, reviews are just opinions on what we do and do not like). The song, saluting street artists, is placed perfectly as the last track on the album. If it was placed elsewhere, I think (as a whole album), it would affect my thoughts on the record, but with it as the last song, makes the record more wonderful. The song does sneak in the F-word, but historically, this was before warning labels and the P.R.M.C., which changed music demands on releases with swearing and questionable content. Nonetheless, the song fits the overall tone of the whole record.

Sometimes people list Hagar’s work in the category of “Pre-Van Halen” and “Post-Van Halen.” Even though this was his last solo release before joining the band, it has been his most successful solo album, and with good reason. Even though I am not a major fan of the last song, the overall placement of the tracks, and the quality of the songs, holds up after all these years. I would be as bold to say that VOA is one of the best albums of the 1980s in ANY genre, when looking at every song being great, and again, wisely chosen to be on the record. The run time is rather short, without filler solos or extra stuff that is not needed. The musicianship is great as well. Sammy’s band on this record does not get the credit of being a complete unit, where everything fits where it should and compliments each other. VOA does not sound dated, and still is a go to album when I want to rock out. It is one of the releases that is as close to a perfect album as I could choose from the 1980s.