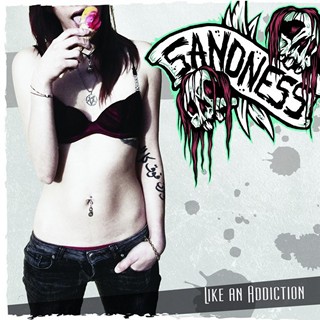 SANDNESS
LIKE AN ADDICTION
Released on April 5, 2013 (Sleaszy Rider Records)

Review:
Sandness are an Italian band that was created in 2008 to play ’80s glam influenced rock music. After two demo releases and positive stage buzz (including stints opening for L.A. Guns and Adam Bomb), the trio known as Sandness have released their first official album titled Like An Addiction. After one listen you realize that, although five years have passed since their formation, the focus is still the ’80s sound that this group craves.

Throughout Like An Addiction, the guitars move fast and the ’80s cliche lyrics even faster. At their best, songs like “Darkness Around Me” and “Dreamin’ Is My Way” show potential for a unique twist (sleazy blues sound) to go along with their straight up ’80s approach. The flip side are tunes like “Bad Things Cause Bad Things” and “Don’t Drop”, both sounding more ‘dated eighties’ versus nostalgic.

Like An Addiction is an album for serious fans of the ’80s glam genre. No more, no less — I’m assuming exactly as Sandness envisioned.