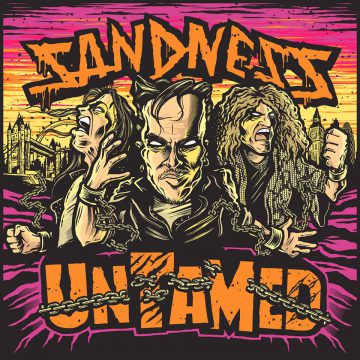 Review:
Sandness are a trio from Rovereto, Italy. Untamed is their third full length release, starting with Like An Addiction in 2013 and Higher & Higher in 2016. Basically, the band began with two high school friends, Mark Denkley and Metyou ToMeatyou, wanting to chase their hard rock dreams. I can’t find much other background, other than in the past they have shared the stage on various tours with L.A. Guns, Tygers of Pan Tang, Hell In The Club and Reckless Love.

I will say off the top, to my ears, the MP3 version of this album lacks “pop.”  The production is kind of flat, almost like it was either under mixed or too compressed in the final mix. That’s disappointing, because there are some good elements to Untamed. I almost think it doesn’t matter, considering how well Sandness recreate the ’80s sound and perform well in their own right.

“Life’s A Thrill” is an adrenaline track with a killer vocal line, especially in the chorus. The vocalist does have a strong accent throughout the album sometimes making it difficult to get the lyrics right, but again, it really doesn’t matter. “Tyger Bite” not only starts with a good riff, but is one of those verses that rely on a 4/4 bass line…. Babylon A.D. maybe. “London” combines the old and the new. More melodic than sleaze, I sense they picked up the idea after touring with Reckless Love.

The lyrics to “Never Givin’ Up” start with “Hey you’re a loser, this is why no one loves you.” OK, that made me feel sad, and although the lyrics are difficult to discern, the message is essentially stick to your guns and never give up. Oh, and it’s also a strong rock song. There is a very good shuffle on “Easy” that really works. “Radio Show” reminds me of early L.A. Guns, while “Tell Me Tell Me” is smacking me in the face with Poison’s “Unskinny Bop” rhythm and feel… but not so cheesy. I do like the guitar line on “The Deepest Side of Me.” A bit of metal with a dash of funk. The song itself seems written by committee, with the intro, verse, bridge, and chorus as quite different animals. Similarly, when “Until It’s Over” gets beyond the solo piano intro, there’s a killer guitar line in there.

So, let’s recap. Untamed is the third full length album from Sandness. These tracks could be better produced, highlighting the quality musicianship. Yet, the songs are tight and listenable, with many channelling an old school hard rock / sleaze vibe. I kind of liked it.