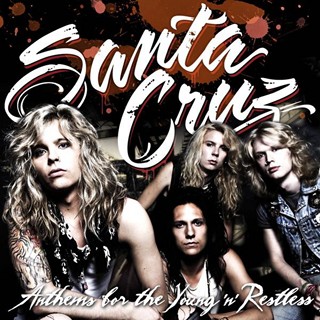 Review:
2011 was a year of a lot great comebacks, both from well-established hard rock veterans as well as a new generation of rockers — from the latter group comes a hot new act named Santa Cruz. This band, formed in 2007, is a collaboration of some very young dudes hailing from the Finnish capital of Helsinki. The band’s MySpace site claims they were formed ‘on the hot summer of 2007’, which may seem like a bit of a stretch since Helsinki is one of the coldest places on Earth. Despite that, after recording some demos and touring extensively, these newcomers released a six-song EP which is one of the hottest debuts of 2011.

The EP’s title track makes you want to get inside your car, whether you drive a Corvette or a vintage Nissan, and break every speed limit. Lead singer Archie is more of a screamer than a crooner, and delivers some of the best vocal blasts this side of early Shotgun Messiah — listen to “Let’s Get The Party Started” for solid proof of that. The remaining songs continue to blow your mind as Santa Cruz combines great riffs with nothing less than some of the best twin guitar solos out there. Check them out, as it is beyond me how such young dudes can play guitar with such ease and craftiness. Solos on songs such as “Over The Limit” and “We’re Aiming High” could put some of the most well known guitarists to shame. But the band’s ability to execute terrific solos does not exclude their ability to create crushing riffs, which are pasted all over the EP.

All in all Anthems For The Young ‘N’ Restless shows that Santa Cruz‘s main strengths are terrific guitar work and a certain youthful ferociousness. The songs represented here are a great soundtrack to trash something or get copped for speeding, and listening to these tracks one easily gets the impression that this young band are hungry for a slice of the rock ‘n’ roll pie.

The only problem with Anthems For The Young ‘N’ Restless is that it is really hard to find, as the band is still unsigned to any label. To my knowledge the only way to get it is to buy it directly from the band’s merch stand after one of their shows or online through the site www.recordshopx.com, which doesn’t leave a lot of options — but if you can get your hands on this, trust me, you won’t regret it. Adrenaline packed, screaming in your face hard rock… personally I believe this to be the best debut of 2011.