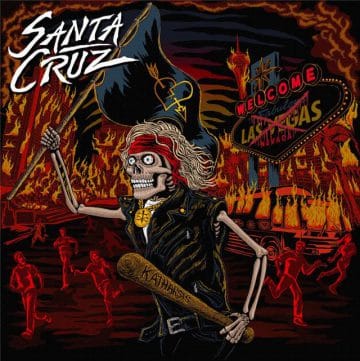 Review:
One of the most highly anticipated albums of the year within the sleaze and hard rock genre, without a doubt, has been the latest release by Finnish rockers, Santa Cruz. Perennially finishing in the annual Sleaze Roxx readers’ year-end polls, the band burst on to the scene with their 2013 debut, Screaming For Adrenaline. The talented foursome continued to turn heads with their subsequent albums, Santa Cruz and Bad Blood Rising. Following a successful U.S. tour opening for Sebastian Bach as well as chatter from Eddie Trunk, the band was really starting to make headway as one of the hottest young bands anywhere. Early 2018 saw the band embark on another U.S. tour, this time in support of the Chris Jericho fronted Fozzy, when out of nowhere everything came crashing to a halt. Overnight, reports started to surface that Santa Cruz cancelled the remainder of their tour dates and social media accounts began to state that lead singer and guitarist, Archie Cruz, was now the only member of the band remaining. Following a very erratic call in to SiriusXM’s Trunk Nation, Archie himself seemed unsure as to what exactly went down, only vowing to carry on with Santa Cruz. For the remainder of 2018 and into the new year, various new band members came and subsequently left as many fans wondered what exactly was going on in Santa Cruz.

The debut single — the aptly titled “Changing of Seasons” — from the new Archie-led Santa Cruz, dropped earlier this year. My initial excitement for the first new Cruz tune was a bit tempered when I heard it. I totally get the self-reflective tone in the lyrics. Phrases like, “I’ve been to hell and back” and “It’s time to live my life” make me wonder how toxic things got in the band before it all hit the proverbial fan. Musically, the track almost sounded like a demo. It came across a bit flat compared to previous gems this band had dished out. When the second track “Tell Me Why” came along, I immediately dug it. The self-reflective tone continued to ooze through my speakers, but this song came across more polished and produced than the first track. This was more along the lines of what I have grown accustomed to expecting from Santa Cruz. The final songs released before the album was “Into The War.” The overall tone continued through this single. The song itself is ok but does not scream hit or single to me. As far as I was concerned, the band was one out of three on new tunes and my skepticism started to grow as the release date came for the record.

October 18th brought the long-awaited release of Katharsis, Santa Cruz’s fourth full-length album. The album contains ten originals and a bonus cover of “Time After Time,” totaling 39 minutes. The album artwork itself looks generic and cheesy, ala L.A. Guns‘ horrific Tales From The Strip or Poison‘s Hollyweird. A generic new logo also adorns the cover. The album opens with the aforementioned “Changing of Seasons” before moving into the overly generic sounding “Bang Bang (My Worst Enemy).” Up next is “Into The War” followed by the ballad, “I Want You To Mean It” which does absolutely nothing for me aside from a short, but decent guitar solo.

One thing that really bothers me about this album is the drums. Everything just sounds like a poorly done drum machine, nothing from a kit and there are zero fills on the album. A good mid-tempo rocker called “True Believer” combined with “Tell Me Why” gives you the best two songs on the record. The fourth single “Testify” holds its own after the album’s peak. Two complete duds drag us back down — “Smoke Signals” and “”It Was You” — before the album concludes with “Salvation,” a track that  while decent, just seems to be missing that little bit of goodness to push it over the top, something that is weaved throughout this album. The album as a whole, is just missing that “it” factor that every previous Santa Cruz record had. There are bits and pieces, a decent couple of songs, but nothing overly great that stands out. The album is sadly, rather forgetful and a huge disappointment.

This begs the question, what the hell happened to Santa Cruz? As far as I know, there has not been a single word about the falling out from Johnny, Middy, or Taz. Where are these guys? To be clear, Archie did not fire them. They kicked him off the bus mid-tour. I credit him for picking up whatever pieces he could and forging on musically and doing his thing, but there are so many questions. Where are they? Do they lay some claim to the band and the same? Is that why their cool logo is nowhere to be found? One thing is for certain, the three missing ingredients are sorely missed. The rhythm section of Taz and Middy Cruz was killer! There’s seemingly no rhythm section to be found on the new record. Similarly, the fantastic guitar work of Johnny Cruz is missing.

I don’t know if I gave Archie himself too much credit within the Santa Cruz camp, but I now know without a doubt that the other three guys played a massive role in the music that the band produced and the new band does not even come remotely close to filling their shoes. As of late, I have found myself reverting back to listening to the original three albums and when compared to them, Katharsis is terrible. Do your thing Archie. More power to you, but Johnny, Middy, Taz… where are you guys? Are you still together? Are you making music? Do you lay a claim to the name Santa Cruz? Are you auditioning singers? Your fans want to know.

“Testify” is the newest single from SANTA CRUZ’s new album, “Katharsis.” Request it on your local rock radio station.Produced, engineered, mixed and mastered…

The third preview track from the Helsinki Hellraisers’ new album, “Katharsis,” which will be released Oct. 18. Pre-order it here: http://smarturl.it/katharsi…

Santa Cruz‘s “Tell Me Why” single:

Santa Cruz – “Tell Me Why” (official)

The second preview track from the Helsinki Hellraisers’ new album, “Katharsis,” coming this fall! Follow the band on socials for details about the upcoming p…